Update:  Drive BC advised Tuesday night that the road had re-opened to both lanes of traffic. 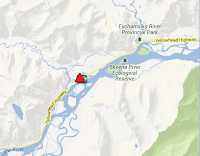 Travel between Terrace and Prince Rupert has come to a stop as Highway officials and the RCMP attend to a vehicle incident 60 kilometres west of Terrace.

Reports out of Terrace advised that a truck carrying lumber had overturned and lost its load, resulting in the closure of the highway.

The location of the incident is just west of Exchamsiks Provincial Park, with assessments currently underway.

Drive BC does not provide a timetable as to when they anticipate the road to re-opened to traffic.

Updates will be provided to their Drive BC website or from their twitter feed through the afternoon with the latest information as to the status of the highway.

The Highway 16 closure is  the second major road incident of the day for the Northwest, earlier today Highway 37 between Terrace and Kitimat was closed after a truck jack-knifed south of the Kitamaat Village Road, that route was cleared shortly after 11 am.

Email ThisBlogThis!Share to TwitterShare to FacebookShare to Pinterest
Labels: Highway 16 closed due to vehicle incident Nov 19 2013