City Council to look over Schedule of sessions for 2014

Members of Prince Rupert City Council have some homework to take care of prior to their final session of 2013 taking place on December 9th.

Newly hired Corporate Administrator Rory Mandryk has submitted for their review, a template for their City Council sessions for 2014, seeking feedback and guidance at the next council session.

The blueprint for next year's public sessions of City Council would find council meeting only once in January, August, September and December in 2014, with two meetings a month in the remaining eight months of the year. 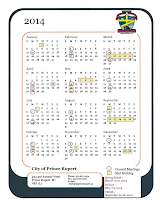 Making for a total of 20 public sessions held through 2014.

That would make for a reduction of two scheduled council meetings per year, for the City's Mayor, six councillors and staff members to make plans to attend.

This past year, counting ahead to the final session of the year of December 9th, Council members had 22 meetings scheduled since January 14th.

Though, in reality, they only sat at 21 of those scheduled sessions, as the council session for July 29th was cancelled this year.

You can learn more about his proposed schedule from the City Council Video Archive, the outline of the proposal can be found at the 49 minute mark.

Councillors will have the opportunity to offer up their thoughts on the proposal at the December 9th session. You can review the proposed schedule as part of the City Council Agenda from Monday evening, it can be found on page 20 of the package provided to the City's councillors.

Not in the mix for discussion at this time, but something that Council may wish to direct some of its attention towards, is the large number of closed sessions that Council holds over the course of a year.

Since January 2013, Prince Rupert City Council has held 27 sessions this year that have been closed to the public.

And while a number of those clearly involved some delicate issues regarding Watson Island and its associated legal troubles, it's still a rather large number of sessions where the public is excluded.

When you have a situation where you have more closed sessions, than open ones over the course of a year, the City may wish to look into perhaps if they could not be a little more open and transparent to the community.
Posted by . at 3:53 PM

Email ThisBlogThis!Share to TwitterShare to FacebookShare to Pinterest
Labels: Council to consider schedule of sessions for 2014