Nathan Cullen to step away from BC NDP leadership race

At the end of the day, Mr. Cullen it seems will stay in Ottawa.

After weighing his options for about a month now, Nathan Cullen has reached a decision and his political future will not involve the seeking of the BC NDP leadership.

Instead the NDP MP for Bulkley-Valley Skeena has decided to remain in Ottawa as a federal MP.

Just yesterday, Cullen had given an interview with CFTK, outlining some of the key issues that are on his mind and how they were shading his plans, adding that he was getting closer to a decision.

That decision apparently was reached within the last 24 hours with the delivery of his Friday afternoon announcement.

Word of his plans spread fast from Ottawa this afternoon, the details of his announcement posted to his facebook page.

From his social media page, he outlined that while humbled and inspired by the call from BC for him to consider the NDP leadership of the province, he instead believes that there is still important work to finish in Ottawa. 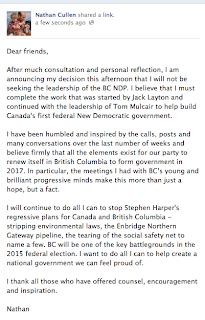 His decision may come as welcome news to those supporters of his on the North Coast, a group which values his work on environmental issues in Ottawa.

However there will be perhaps just as many that will be disappointed, as there was a fair amount of support for him to make the migration to the provincial scene.

He is the first of the high profile Federal NDP members in Ottawa, to make a decision to not seek the job that Adrian Dix will surrender next year.

You can review ome of the past commentary on his leadership ambitions from our archive page here.

Media reviews of his announcement can be found below, we will add to the listings as they become available.

Email ThisBlogThis!Share to TwitterShare to FacebookShare to Pinterest
Labels: Cullen to stay in Ottawa