With the City Council learning from the Chief Financial Officer that it has had to defer repairs to the Sixth Avenue bridge until 2014, the Mayor has suggested that it may be prudent to have an alternative plan in place, should the city find that they need to close that bridge to traffic at some point. 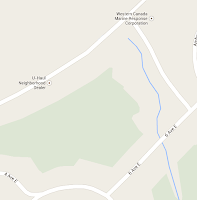 Towards that thought, the Mayor outlined for Council on Monday night that perhaps they may wish to have city staff draw up an alternative route, which would see a road developed behind the Hays Cove Petro-Canada.

A proposed route which would move traffic down towards George Hills Way and then back up around the bridge by way of Drydock road.

While hoping that there will be no need for such a plan to be put into effect, Mayor Mussallem did provide some thoughts for Council that the need for repairs and refurbishments to the city's aging infra-structure remains a key issue for the city.

You can review his discussion on that theme from the City's Video Archive for November 25th, the Mayor's commentary on the bridge situation arrives at the 40 to 44 minute mark.
Posted by . at 8:54 AM