Development of the resources of the Northwest  is clearly going to have a major impact on the region over the next number of decades. Bringing with it significant change to communities from Haida Gwaii to the Bulkley Valley.

If the concerns of those communities are to be addressed, Nathan Cullen, the NDP MP for Skeena-Bulkley Valley believes that there is a need to engage the community in the debate.

Suggesting that it will require the participation of both industry and the residents of the region, to deliver what is best for the Northwest.

Mr. Cullen, introduces a new theme into the discussion this week . Offering up the proposal that there may be need for a Social License. An agreement between parties, as how to move forward with the many projects currently being mentioned across the region.

Mr. Cullen shared his Social License concept, by way of a household mailer this week. An information  pamphlet which has started to arrive in mailboxes across the riding.

In it, he outlines the many facets of this compact between developers and residents, explaining the concept of the Social License and what he believes it offers local communities.

Developed through community forums in the Northwest in the winter and spring of this year, the MP envisions it as one of the most important of permits that is required before shovels can hit the dirt.

His thought being that the Social license will help to remove the belief by some, that people have to make a choice between jobs or the environment.

"A "Social License to operate" means having the support and input that every company needs from the community before and during development. Even though it isn't written into law, companies and communities alike are starting to realize that a "social license" is one of the most important permits they need to achieve before shovels can hit the dirt" -- From a Nathan Cullen household mailer, outlining what a Social License is and how it is introduced into communities.

To help his constituents explore the process further, he has included in his mailer a scorecard. Allowing residents to weigh the impact of the projects under consideration in the region. Recommending that they rate a variety of aspects of the proposed developments on a scale of 1 to 5.

Go Local-- Offering training and jobs to the local workforce first, and keeping jobs in the area by adding value to natural resources.

Environment-- Protecting our land, air and water, and being accountable.

Accountability-- Having a good track record of protecting communities and the environment, and living up to promises made.

He asks for his constituents to examine how each project in their area scores to a total of 25. 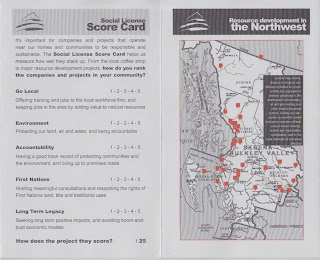 Background on the Social License concept can be found below, click on each page of the household mailer icon to learn more about his proposal.

As the MP points out, the Social License process isn't a law and unless the local council's, whether Municipal or First Nation become involved in the concept, it would seem to be more of a political covenant between the industrial developers and those in the community that see things through the same prism as Mr. Cullen.

Even then, the Provincial Government is perhaps the level of government that will have the definitive word when it comes to large scale development, how they may react to the idea of Mr. Cullen's Social License remains to be seen.

We imagine more than anything else, at this point his mailer, is more of a conversation starter, rather than any kind of industrial blue print.

Whether it becomes a fixture of the Northwest development process, is something that will be interesting to follow along with, as we head into what may be years of unprecedented growth for the region.

Those that did not receive the mailer, can contact the MP's constituency office closest to them to seek out more information on the topic.