As winter approaches, caution the word for those travelling the backcountry 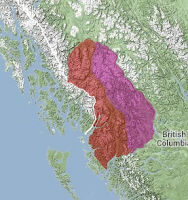 Last weeks snowfall provided the first burst of winter for the North Coast and with it a timely reminder for those that travel the backcountry to be aware of the conditions that they may face.

The Canadian Avalanche Centre is gearing up for the 2013-14 winter season and offered up the first of its warnings for the season.

The two areas of note for residents of the North West are as follows:

The initial Avalanche report for the region has the Northwest Coastal region rated at Low-Moderate below the treelike, with a higher risk, the higher one travels into the back country.

As the season moves forward, updates will be provided to those two portals as to conditions of concern for those that may be transiting through the regions.

You can learn more about the Canadian Avalanche Centre and its work from their website
Posted by . at 8:16 AM