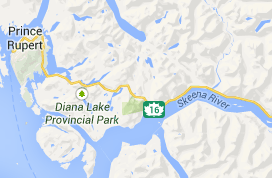 Prince Rupert RCMP confirmed Tuesday that swift water rescue teams have been called out, in a search for three people reported missing after a weekend trip to the south side of the Skeena River.

In total three boats were called out at mid-morning today, all part of the effort to locate the three, who had taken a boat to the Frizzell Hot Springs, a popular local getaway spot only accessible by boat.

The RCMP and Terrace Search and Rescue are conducting the search in the region, which is located 30-35 kilometres east of Prince Rupert.

CFNR Radio and Opinion 250 had the first media reports of the search currently underway.

Police, Search and Rescue Teams from Terrace and Prince Rupert as well as Coast Guard resources were all involved in the search on Tuesday.

They will resume their efforts in the morning, in the search for the remaining two individuals who are also from the Terrace area.

Further items on the search from a variety of media outlets can be found below.