One fatality, one injured in motor vehicle incident on Highway 16 near Frederick Street 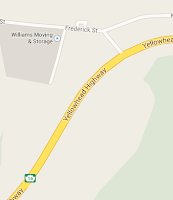 Early Sunday morning, Prince Rupert RCMP, along with Prince Rupert Fire/Rescue and the BC Ambulance service responded to an emergency call on the outskirts of the city. Alerted to a single vehicle incident on Highway 16 near the Frederick Street turnoff.

By Sunday afternoon, the RCMP had confirmed that upon arrival at approximately 3:30 AM, the emergency responders found one person, a male, deceased and another person injured.

That after a Blue Ford Ranger had left the road and was found resting in a ditch.

The injured person was transported to Prince Rupert Regional Hospital by BC Ambulance and subsequently released with minor injuries.

The two are from the Prince Rupert area and the RCMP has conducted a next of kin notification. However out of consideration to the family, no names have been released in regard to this incident.

Highway 16 was closed to traffic for a short period of time, while the accident investigation took place, with a detour put in place around the incident site.

A traffic analyst has now commenced with a review of the circumstances of the early morning fatality, with the Coroner Service of British Columbia also involved in the investigation.

As that investigation is now ongoing, the Prince Rupert detachment asks that anyone with any information on the incident contact the RCMP at 250-627-0700 or through Crimestoppers at 1-800-222-TIPS (8477)