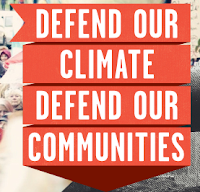 Those opposing the prospect of pipeline development in Canada and in particular British Columbia, will be launching a cross Canada Day of Protest on Saturday, November 16th.

The mission statement, if you will, as taken from the Defend our climate website, calls for Canadians to "help build a united wall of opposition to pipelines, reckless tar sands expansion and runaway climate change at local events across the country."

In Prince Rupert, that would appear to be a planned protest to be held outside the offices of the Prince Rupert Port Authority in the Atlin Terminal, where organizers plan to link arms in protest,  to show their opposition to any proposals on oil tanker traffic on the North Coast. 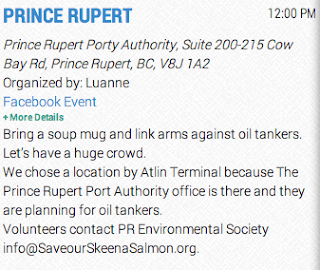 They also offer up and update on their plans with a Facebook page on the theme which was created on November 1st.

The local protest is being organized by the Prince Rupert Environmental Society, those that wish to contact that group can get in touch by way of email at info@SaveourSkeenaSalmon.org

Both a Facebook page and twitter feed for the national day of protest have also been created to provide updates on national developments.

Some of other protests in the region that day are planned for Terrace, Kitimat and Smithers.