Friday travel to the Central Interior could bring delays

For those of the North coast making travel plans into Prince George and south on Highway 97, Friday may provide for a rather lengthy trip.

The first major snowstorm of the season has begun to make its presence felt in the Central interior, with Prince George having already received some 10 cm of snow, with another 15 cm anticipated before the system clears out. 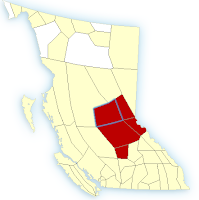 Power outages are being reported in some areas of the region, as the snow brings branches down on power lines. By 10 AM, BC Hydro had a listing of some 21 power outages recorded on its Outages list.

Further south, Drive BC has been advising of travel advisories for stretches of Highway 97 near the Williams Lake region. 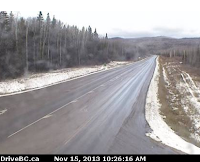 Travellers heading eastbound most likely won't find any major troubles until they reach the Burns Lake are, the string of Highway cameras along Highway 16 so far show clear conditions until the eastern edge of the Bulkley Valley.

Updated weather conditions can be found from the Environment Canada website.

More News accounts of Friday's weather as the system passed through the Prince George region:

Email ThisBlogThis!Share to TwitterShare to FacebookShare to Pinterest
Labels: Travellers eastbound will face snow conditions from Vanderhoof on