The Sixth Chair of the Council Chamber belongs to... Barry Cunningham

Selecting him as their sixth representative for the final 12 months of this three year Council term.

Mr. Cunningham received 943 votes, a 197 vote cushion between his first place finish and that of Gurvinder Randhawa the second place finisher who received 746 votes from the ballot count.

The remainder of the vote tallies were as follows.

By percentage Mr. Cunningham captured 39.7 per cent of the vote, Mr. Randhawa 31.4 per cent with Mr. Niesh at 17.6 percent holding the potential swing vote that may have had an impact on the front runners.

Rounding out the night's percentage totals were: Mr. Kirk at 4.6 per cent, Mr. Golden 3.7 per cent and Mr. Lovering with 2.9 per cent. 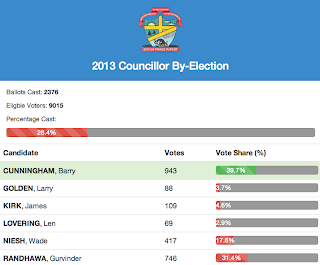 As expected the turnout for the by-election was light, out of 9,015 eligible voters, 2,376 cast votes a 26.4 per cent turnout. That made for a drop in voter participation from the total turn out for the 2011election, which was 35.3 percent.

Comparisons between the by-election results Saturday and those of the last municipal election, highlight the difference in voter interest between the two election periods.

As the results of 2011 provided,  Ms. Rice the now departed Councillor received 1,669 votes for a third place result, while the sixth place finisher in that campaign, Judy Carlick-Pearson received 1,080.

Without a Mayoralty campaign as a draw, numbers this time around were quite a bit lower.  The top vote total of Saturday's by-election, wouldn't even have made the cut when the ballots were counted in 2011.

At 943 votes, Mr. Cunningham's tally would have come up short of the cut off period that year, placing him in the same statistical spot as 2011's seventh place finisher Rob Vallee who had 939 total votes .

As for campaign just concluded, it's of interest to note that of the six candidates that ran for Council in this by-election, Mr. Cunningham, owing to a medical issue, was the only one not to attend the Public Forum held November 6th.

Which means  that in a campaign which provided little opportunity for voters to learn much of anything about the candidates positions on issues, Mr. Cunningham still managed to take home a victory despite not being in attendance to outline his platform, or answer questions at that one public information session.

The by-election was also unusual in that little in the way of background information was delivered to would be voters, whether by way of traditional political pamphlets or through any forms of online information.

Much of Saturday's electoral success it would seem, could be the result of the efforts of Mr. Cunningham's team and of the city's labour movement in getting its vote out.

With Mr. Cunningham's position as President of the Union of Canadian Transportation Employees, perhaps having found appeal to a large segment of those who were motivated to make it to the polls on by-election day.

As he takes over the open seat on Council, he will join fellow Labour leader Joy Thorkelson of UFAWU as part of the six member council, which will certainly give the city's Labour movement a firm foundation in Council Chambers.

With two labour leaders holding 1/3 of the seats on Council, the opportunity for issues of interest to Labour to be featured as a portion of the discussion every two weeks, could be a common thing during the final year of this Council's mandate.

One issue where the pair will find certainly find some common ground is the theme of housing in the community, a frequent topic of concern of Councillor Thorkelson during Council sessions, it was one of the main talking points in Mr. Cunningham's campaign advertising.

Rupertites will have the opportunity to learn more about his thoughts on that and other issues at the end of the month, the new City Councillor will claim Ms. Rice's vacant seat at the November 25th City Council session.

You can review the events of the by-election campaign from our archive page.