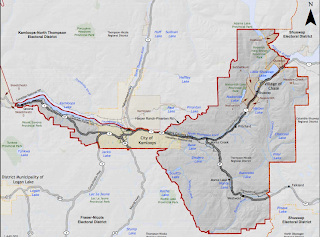 A name from Prince Rupert's past, is making news in NDP circles in the Interior region of the province this week.

Peter Northcott, a well known former teacher with School District 52, left Prince Rupert eight years ago, moving to Kamloops with his wife. Yesterday it was announced that the now retired teacher, has taken on a new challenge, named as President of the Kamloops-South Thompson NDP Constituency Association.

Northcott has been fairly active in political life in the Interior, particularly during the course of the most recent electoral campaign. Where he could be regularly found showing the NDP flag  through a variety of letters to the editor of the various Kamloops papers.

With his new post, he will be looking to rebuild and re-energize the NDP in the region, a challenge  which he spoke to the Kamloops Daily News regarding.

It could be a formidable task ahead for the new President.

The NDP's candidate Tom Friedman, finished significantly behind the Liberal's Todd Stone in the May election, with Mr. Stone, now the Minister of Transportation and Infrastructure, picking up 57.5 percent of the vote compared to Mr. Friedman's 35 percent.

Over the last decade, the Kamloops-South Thompson riding has been a Liberal bastion, previous to Mr. Stone, the riding was held by Kevin Krueger and before him Claude Richmond.