Come for the Protest, stay for some information 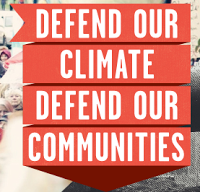 As we first outlined on the blog last Friday, Prince Rupert will be one of a number of locations across Canada where protests over climate concerns will take place on Saturday.

Organizers of the Day of Protest, which is using the banner of Defend our Climate, Defend our Communities has targeted the Prince Rupert Port Authority for their protest, fearful that the Port is in the process of making plans to ship oil out of the North Coast.

The protest which will take place Saturday from Noon until 1, will have those in attendance share a cup of chowder if they wish and then  link arms in symbolic gesture to the Port Authority.

More on their plans can be found from their facebook page about the event.

The Port is taking the approach that they believe they act in a sustainable and responsible manner when it comes to any cargo movements in and out of Prince Rupert harbour.  Highlighting their commitment towards maintaining safety practices towards those themes that are of concern to the protesters.

Since they'll be in the neighbourhood anyways, once the event has wrapped up for the afternoon, the day's participants could always take a bit of time to drop into the Port's Interpretive Centre.

Saturday provides a pretty good opportunity to discover a bit more about some of the practices that are in place when it comes to Port activities, as well as how the Port may be approaching their shared concerns.

Some of the local media caught wind of the planned protest this week, a few of their contributions to the coverage of it can be found below.

Email ThisBlogThis!Share to TwitterShare to FacebookShare to Pinterest
Labels: Day of Protest Saturday on potential oil shipments from North Coast