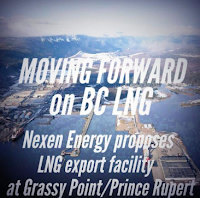 "Through project assessment and stakeholder consultation we are committed to examining the potential to build a best-in-class LNG facility - one that creates jobs, delivers lasting economic and social benefits and is developed with the environment top-of-mind," -- Nexen CEO Kevin Reinhart, speaking on behalf of his company and the joint venture partners regarding plans for development of an LNG Terminal at Grassy Point.

Another step in the planning for an LNG future for the North Coast was announced on Tuesday, with Nexen, the company purchased  by the Chinese state owned energy company CNOOC, reaching terms with the Province of British Columbia on a 24 million dollar agreement regarding Crown Land for their proposed Terminal location.

The agreement between the Province and Aurora LNG is a sole proponent agreement, which provides the company with the exclusive right to move forward with the planning required to build LNG export infrastructure at the Grassy Point Location.

Aurora will pay 12 million dollars to the Province upon signing the sole proponent agreement, the remaining 12 million will be paid on or before the first anniversary of the agreement, as long as the energy company wishes to continue on with the arrangement.

The actual acquisition of the land in question for further development will remain a matter for long term negotiations, if Aurora chooses to move ahead with project, that 24 million will be subtracted from the final sale price.

Premier Christy Clark and  Rich Coleman, the Minister for Natural Gas Development announced that the planning for Nexen's Aurora LNG Facility will move forward, though they did stress that it is still very much a project that is only in the proposal phase. More on today's developments can be found here.

Nexen provided some background on the developments regarding their Aurora proposal with this item from their website.

Today's announcement is yet another step in the Expression of Interest process that was launched earlier this year regarding the Grassy Point area.

In their statement today the Provincial Government outlined that discussions are still ongoing with the remaining three proponents for an adjacent parcel of land at Grassy Point.

Nexen's proposal now joins those of Petronas and BG Group to be found in the active file, though no commitment to building the terminal and required pipeline infrastructure has been made from today's announcement.

It will be subject to the same regulatory approval process as the other proposals currently in motion for North Coast locations.

You can learn more about the Grassy Point region and of Nexen's recent moves from our archive page.

We will update the reaction to today's announcement with media reviews as they begin to come in.