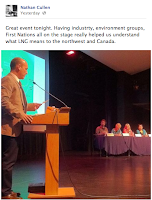 As we outlined on the blog back in October, Mr. Cullen has scheduled a string of information sessions for a number of Northwest communities, hoping to spur on discussion and the exchange of information on the proposed developments for the Northwest.

The first one took place in Terrace on Wednesday night, where the MP for Skeena-Bulkley Valley was host to a number of panel participants who fielded a wide range of questions on the issue of LNG development and the impact it may have on their community.

Appearing on the panel were representatives of Shell Canada, Clean Energy Canada, the Terrace Chamber of Commerce and the Kitselas First nation.

Some background on that session can be found below.

The second of the meetings was held on Thursday in Kitimat at that community's Mount Elizabeth Theatre, where much of the same themes of discussion were up for review.

Following those two sessions the MP took to his twitter feed to offer his thanks to all that participated in this week's forums.

For those in other Northwest communities however the opportunity to learn more will have to wait just a little bit. His proposed stops for Prince Rupert and Smithers were scuttled a few weeks back, owing to scheduling difficulties with the participating panelists.

Those sessions have been rescheduled for sometime in the New Year, with the confirmed dates still to be put in place.

You can keep an eye on both his website, facebook page and twitter feed for further details on round two of his "Let's Talk LNG" series.
Posted by . at 9:37 AM