The road to the 2015 All Native Basketball Tournament gets underway next week, as sixteen teams arrive for the Qualifying tournament, with spots in the Big Show of February on the line for those making the trip to Prince Rupert.

Next week's action opens up on Wednesday, with the Russell Gamble Gymnasium at the Civic Centre hosting the start of four days and nights of basketball. Showcasing a sample of the competition that could be on the court in February, pursuing their basketball dreams on the North Coast.

There are three brackets in play for the next week, with games scheduled in the Seniors, Women's and Intermediate categories.

The Masters teams do not have  a qualifying tournament, with Port Simpson, Greenville and New Aiyansh all moving forward for February's 56th edition of the All Native Basketball Tournament. 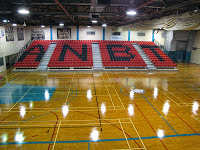 Teams participating in the Qualifying event include:

Wednesday's first tip off comes at 5 PM when Kamloops and Port Simpson launch the Qualifying tournament.

The last match of the four day tourney will be the Seniors Final which bring the event to a close starting at 7 PM on Saturday, the 22nd of November.

You can review the full schedule for the three divisions below, click on the chart for the bracket that is of interest to you:

More background on the qualifying tournament can be found from the ANBT Facebook page as well as their Tournament website.

For more items related to past ANBT events and for those for the 2015 edition see our archive page here.
Posted by . at 9:11 AM