There is a definite change coming to Prince Rupert City Hall, as the voters for challenger Lee Brain demolished the field, providing Mr. Brain with a massive majority vote, propelling him to Prince Rupert's Mayoralty for the next four years.

By the time the counting was wrapped up some forty minutes after the polls had closed, his next closest competitor was incumbent Jack Mussallem who would only record 890 votes.

Trailing even further down the pack were Tony Briglio with 474 votes and Sheila Gordon-Payne who received 411 ballot affirmations.

Considering it was a four way race, the results are even more startling as Mr. Brain won his Mayoralty with 58 percent of the vote, making it a no contest event by the end of the night.

Something that your humble political observer certainly didn't see coming, anticipating as we were, a much much more tighter race for the top office in the city.

For soon to be outgoing Mayor Jack Mussallem, Saturday must surely be seen as a stunning defeat. His totals of 2014 were a significant rebuke of his last three years of work, having lost 879 votes from his 2011 vote count of 1769, a fifty percent evaporation of support.

A good portion of that might political vote collapse, could have come from the approach that the Mayor took during the campaign. Particularly his sometimes dismissive commentary regarding Mr. Brain's campaign platform, a political message that obviously the voting public did not seem to share.

For both Tony Briglio and Sheila Gordon-Payne the task of claiming the Mayoralty race seemed somehow hampered by the actual familiarity of their work in the community.

As the voters approached the need for change at City Hall with a certain amount of enthusiasm, taking that theme of putting a new face in the Mayor's office to the polling station with them.

For the victor, the increased interest in the election and robust numbers to the polls certainly were key to the decision.

As the final numbers were delivered, the City of Prince Rupert recorded 8,443 as the final total of eligible voters for the 2014 election. By the night's end, the total votes cast and counted for Saturday's finale to the election campaign came to 4,293 making for a 50.85% participation rate, significantly higher than 2011's 35 per cent.

And if one thing that is certainly very clear about tonight's final results, the vast majority of those that boosted that totals were voting for Mr. Brain and bringing with them a fair hunk of those that voted in 2011. 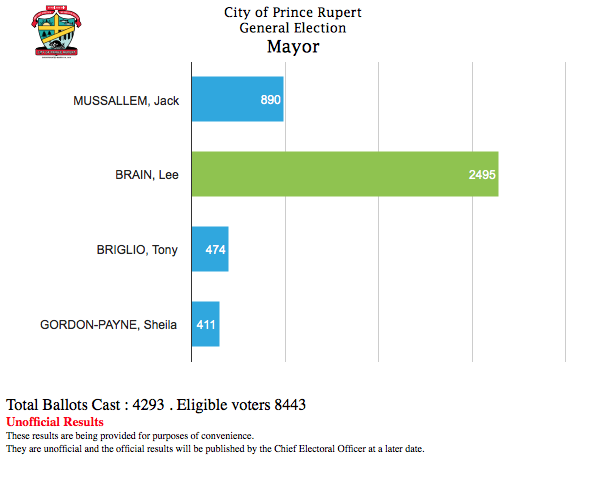 For the new Mayor the learning curve will come fast, the old crew of City Council have one more night to come to bid their farewells, hosting their final City Council session on Monday, November 24th.

Mr. Brain will assume office with the December 1st City Council, when he and the newly elected council are sworn into office.

From that day on, Mr. Brain's call to Re-think Prince Rupert will have arrived.

With the city's residents looking to the new Mayor to provide much more background on the themes of his now successful election campaign and to explain how he plans to put them in motion over the next four years.

The challenges will be many, over the course of the last six weeks, the election campaign outlined a great number of concerns that the community has and which the new City Council and its Mayor will have to approach in fairly quick order.

He should enjoy his well earned victory tonight, his election success was clearly a major achievement for the candidate and his team.

However, the campaign was but the preamble to a very fascinating four years to come.

The real work is fast approaching and there will be a large number of those that put their faith in their new Mayor and a fair amount of those who didn't, all waiting to see what he can deliver.