Haida Gwaii gets a National Geographic Must See designation!

If it's a little more crowded on Haida Gwaii next summer and your favourite spot is a bit more congested, send your complaints to National Geographic Magazine.

The famed International magazine and website has selected Haida Gwaii as one of it's 20 Go Now Destinations, providing a short thumb nails sketch of the Islands, highlighting the silence of the archipelago as one example of a place where your senses will be your guide.

As part of the overview, National Geographic offers up a number of Travel Tips, including When to go, Where to Stay, Where to Eat and Drink and What to Buy.

Of interest is their recommended mode of transportation, which places air travel from Vancouver to Haida Gwaii as the most convenient way to reach the Islands.  Perhaps more indicative of the economic status of their readership, than any form of commentary on the offerings of BC Ferries.

They also offer up a book to read for those planning on making the journey to the Islands, recommending The Golden Spruce: A True Story of Myth, Madness and Greed, the 2006 work from John Vallant that tells the tale of logger turned activist Grant Hadwin's obsession with the 165 foot Tall Sitka Spruce, a story which has become one of the most well known tales of the Islands in recent years. 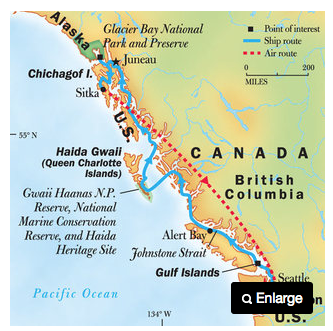 For those dedicated National Geographic Members, (and with a bit of disposable income to dispose of, the Society  is offering a number of expeditions to Haida Gwaii in May and September.

A collection of fifteen day journeys from Seattle. Washington to Sitka, Alaksa, with three days on Haida Gwaii as part of the key focus of the journey. Those comprehensive reviews of the Pacific Northwest range in cost from 10,000 and above with a variety of options.

For the rest of us, the BC Ferries summer schedule with all its challenges will probably have to suffice.  Though once word gets out about the new must see destination, dates no doubt could fill up fast.

To give you an idea as to some of the exotic locales that Haida Gwaii shares as Go to Destinations, the list for 2015 includes:

You can find the Haida Gwaii overview from the National Geographic website
Posted by . at 8:10 AM