School District voters mix it up for Trustees race

When the School District 52 Board next meets, there will be some familiar faces around the table and a few new participants towards the goal of steering education on the local scene.

Prince Rupert voters for the most part seemed satisfied with many of the incumbents, returning Tina Last, Bart Kuntz, Louisa Sanchez and Terri-Lynne Huddlestone to the District offices for the next four years.

Also returning to the School District Board is Janet Beil who won the rural seat by acclamation.

Joining them will be two newcomers to the School District scene, with James Horne and Judy Carlick-Pearson also securing enough votes to take their seats.

In the case of Ms. Carlick-Pearson it's a shift in focus from her previous community work, having moved over to the School District from her three year term on Prince Rupert Council.

The vote count was heavily in favour of experience, with Ms. Last holding the highest vote count on the night at 2,337 with Ms. Carlick-Pearson capturing the sixth and final position on the Board with a vote total of 1,403, a margin of victory of 175 from seventh place finisher Kimberly Williams. 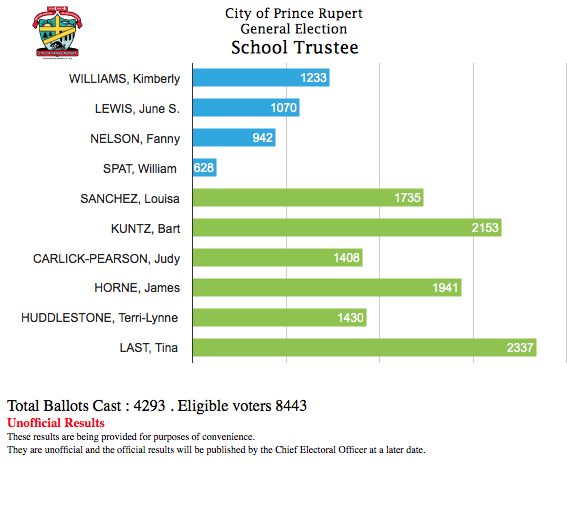 The newly elected Board will face a number of challenges over the next four years, funding reductions and relations with the Provincial Education Ministry, local labour issues and academic results from the schools as well, have all been the focus for the District in recent years.

Concerns and issues that remain, and will still be high on the priority lists moving forward.

With four incumbents returning to the School District Board, and holding positions that are fairly well established over the last number of years.

It will be of interest to those who voted on Saturday, to see if he two new members of the District can bring some new ideas and approaches to long standing concerns in the SD52 environment.

For more on education issues see our archive page here.

Email ThisBlogThis!Share to TwitterShare to FacebookShare to Pinterest
Labels: SD results for 2014 election