Rampage back on the road for weekend series with Smithers

After a one week break from what is a month long road trip for the Prince Rupert Rampage, the team will climb back on the bus for a two game series in Smithers this weekend.

When we last checked in with the Rampage, they had just returned from the gruelling journey to the Cariboo and back, where they had suffered losses in Williams Lake and Quesnel.

With a week to recover from that long haul and to work on some of the trouble areas of their game that popped up during that trip, they head off to Smithers looking to climb back into the race for playoff spots in the CIHL West.

The games in Smithers will be pivotal to that quest, heading into the weekend the Rampage are only one point behind the Steelheads for second place in the West, though Prince Rupert has played two games  more than Smithers so far this year in the CIHL schedule.

Reversing some of their defensive trends will be a key part of the weekend for the Rampage, who have a Goals Against number of 38 so far this year, allowing the third most goals of all CIHL teams this year.

Picking up the offence is also going to be something to address, with the Rampage currently having scored only 23 goals over their seven games of the 2014-15 season.

As they head towards the Central Interior, the Rampage will be looking for Jared Meers, Tyler Bates and Kory Movald to keep up their pace of the early season.

So far this year, Meers has 10 points on the season, with Bates and Movald each accounting for 8 points each.  That accounts for close to half of all of the Rampage points total of 59 up to this weekend. 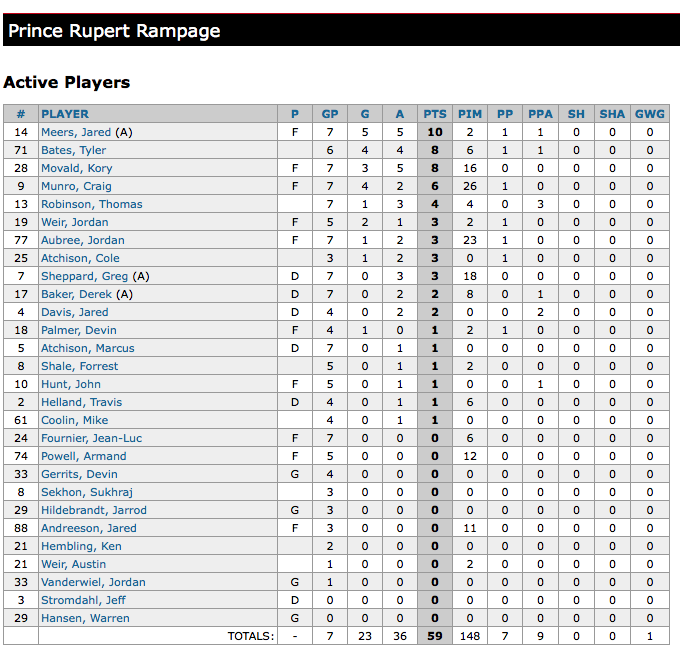 Game time in Smithers on Saturday is 7:30 at the Pond, the two teams return to the ice on Sunday for a 1:30 match up.

For more on the Rampage season so far see our Scores and Results archive page here.

For more background the on the team and the CIHL see our items listed in our CIHL News feature.
Posted by . at 3:21 PM

Email ThisBlogThis!Share to TwitterShare to FacebookShare to Pinterest
Labels: November 2014, Rampage in Smithers this weekend