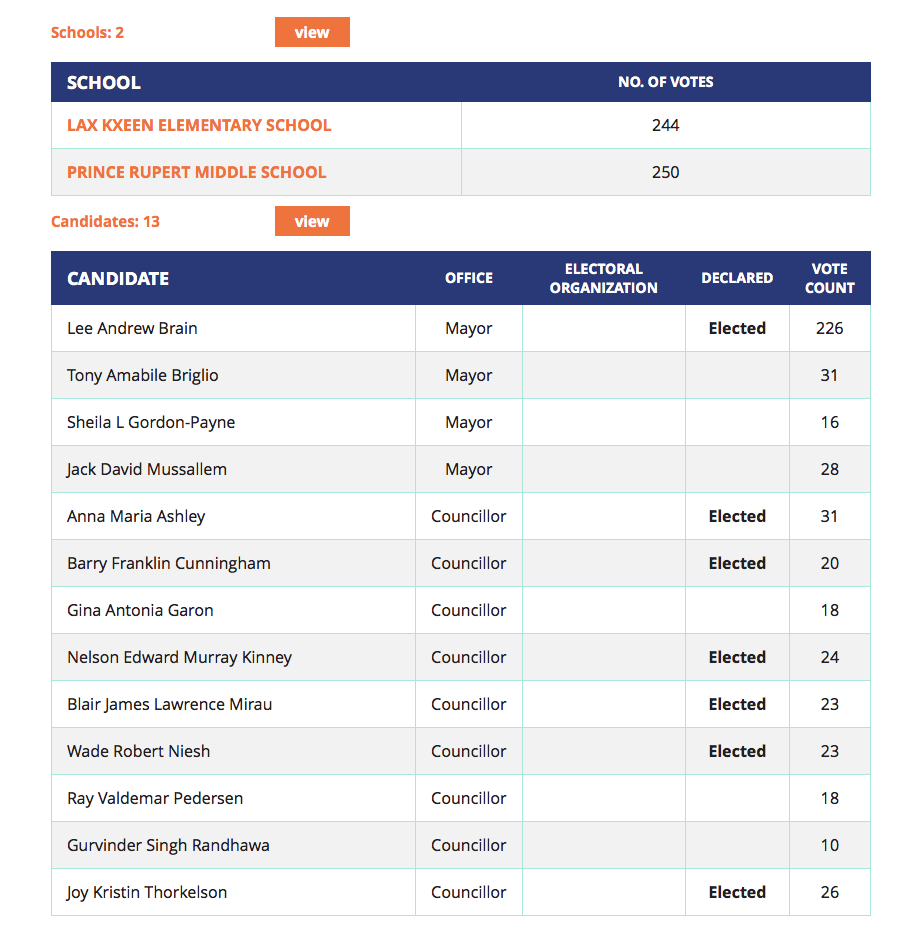 They won't count in the final record of achievement from his November run to office, but the results of the Student Vote held prior to Saturday's municipal election will be just as pleasing for Lee Brain.

Delivering as they did another victory to go with the main event for the new Mayor of Prince Rupert.

In results released yesterday, students at two Prince Rupert Schools echoed the wave of support from those over the age of 18, with another landslide delivered as Mr. Brain collected 226 of the 494 votes cast in the school version of the municipal vote.

Perhaps not a surprise to anyone, considering the large presence of young and enthusiastic volunteers  to his campaign this year, as well as Mr. Brain's work through the last few years for the School District.

The Student Vote Project, which compiles the election leanings of students across the province had participation from two schools from Prince Rupert this year. As students from Lax Kxeen elementary and Prince Rupert Middle School provided their thoughts to the democratic exercise.

The Council results were also fairly close to Saturday's official count from the City of Prince Rupert, with Mayor Brain to see many of the same faces around the Council chamber if the Students had their way.

One exception to the official results stands out however, as Councillor Anna Ashley topped the School Council race with 31 votes.

Trailing her in the final numbers were Joy Thorkelson selected by 26 voters , Nelson Kinney with 24 votes, Wade Niesh received 23 votes, the same count as Brad Mirau, rounding out the six council members for the pre-high school set was Barry Cunningham with 20 votes.

The Student Vote program is designed to engage youth in the voting process and encourage students to learn more about how the election system works and their soon to come responsibilities as voters.

The student vote has been taken for past federal and provincial elections, you can learn more about the project here.
Posted by . at 8:49 AM