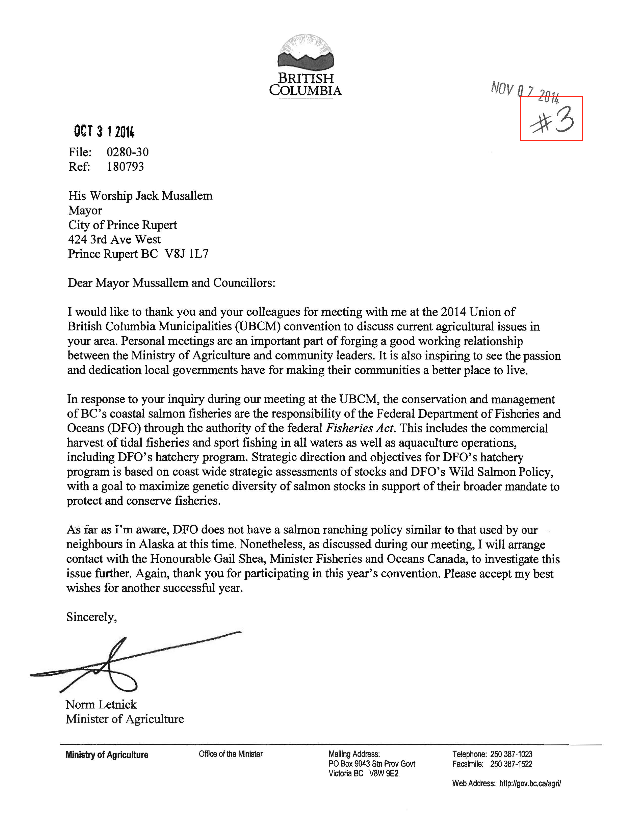 When newly elected Mayor Lee Brain takes office on December 8th, he and his new Council may want to go back into the Information for Council packages that are provided for Council prior to each Council meeting.

The notes from the November 12th report, outline the details of a pair of correspondences for Council to consider, related to discussions held at the UBCM meetings of September in Whistler.

Two provincial cabinet ministers have followed up on some talking points at those sessions, with Environment Minister Mary Polak and Agriculture Minister Norm Letnick suggesting a further exchange between the City and province on a few items from the September get together.

Ms. Polak is not quite as specific as her counterpart in the Agriculture Ministry, as she offers up a short note that her Ministry staff will be following up on whatever issues the City raised with her during their conversation.

Mr. Letnick is a bit more expansive on the discussions that he had with City representatives, which involved the City's concerns over the management of the coastal salmon fishery, discussion points which seemed to involve both tidal fisheries, sport fishery issues and items of note related to fish hatchery operations.  The latter which appears to have involved a discussion on the process in place in Alaska and which the Minister says he will raise with Gail Shea, the Federal Fisheries Minister.

With both Minister's expressing their thoughts on the exchange of ideas at the UBCM session, the opportunity for the new Mayor to follow up on those issues might provide an entry point for a more collaborative approach to Provincial/Municipal relations as he launches his four year term as Mayor.

Those interested in the talking points from the Liberal Cabinet Ministers can review the correspondence from the City's Information package from November 12th. They are listed as items 2 and 3 in the index.

For more items related to Prince Rupert City Council see our archive page here.
Posted by . at 7:52 AM