A Northwest development announcement  of October 29th between the Nisga'a Lisims Government and Trans Canada Corporation,  which detailed the routing of 12 kilometres of Natural Gas Pipeline through the Lava Beds of Nisga'a territory, isn't being universally heralded by some of those of Nisga'a heritage.

Since the proposal was outlined in late October, the voices of those that have some issues with that project have been starting to grow in numbers and volume, with a pair of high profile protests taking place on Remembrance Day in Vancouver and in the Nass Valley. 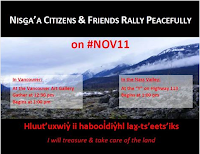 However, the vocal group it would seem does not represent the views of all members of the Nisga'a First Nation, and obviously not the opinion of the Nisga'a Lisims Government which negotiated the deal with Trans Canada Corporation.

A sample of some of the discussion that the proposed project is providing for in the Nass Valley and beyond, can be found on the Facebook page created to announce the rally that took place to protest the planned development on Tuesday.


While many that reviewed the page spoke in favour of the planned protests on the issue, there were others that pointed out that there had been a process in place during the negotiations of the project and that it was voted on by their government. Adding more to their comments on the topic, by observing as to some of the opportunities for the area that those controversial 12 kilometres may bring.

However, for those that have their concerns regarding the proposal, the work it would seem is just getting underway. And it would seem that there may be some larger issues involved, which perhaps are contributing to some of the current discontent beyond just the natural gas pipeline.

A short video of the Nass Valley protest of the 11th was posted to the You Tube video portal on Wednesday.

As for the backlash towards the actual pipeline project, the recent opposition to the plan has started to gain attention from the media in the province.

With some media outlets providing some background on the issues related to the project and outlining more details on the protests of this week.

For a wider review of what the natural gas pipeline project would look like see our article from October 31st here.

The proposed pipeline project is still working its way through its environmental process, as well as awaiting a final investment decision by Pacific NorthWest LNG.

Should the proposed  Lelu Island terminal facility be given the go ahead,  the Port Edward terminal will be the destination for the gas travelling through the pipeline from British Columbia's North East gas fields.
Posted by . at 8:49 AM