North Coast hockey fans looking to check in on the progress of Prince Rupert's Frank Slubowski can take in the action of the WMU Broncos through a live stream this afternoon.

The Broncos are in Notre Dame, Indiana for the University of Notre Dame's famed Shillelagh Tournament, with the Broncos set to face off against the Buckeyes of Ohio State.

This year marks the fifth year of the highly anticipated tournament, which features the host Fighting Irish and Union College to round out the four participants over the two days of hockey action from the Notre Dame Campus.

According to the WMU Twitter feed the game will be streamed live through the Notre Dame website. Puck drop for Friday's match up is 2 PM Pacific Time.

The Bronco's have not announced the starting line up for this afternoons first game of the tournament, so it's unknown at this time, if head coach Andy Murray will give the nod to Slubowski for the start in the Ohio State match up. 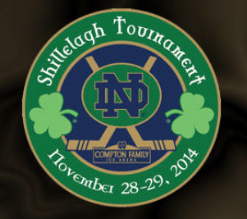 You can take a look at some of the previews for today's game and the tournament below:

For more items on Prince Rupert athletes playing away from the North Coast see our archive page here.

WMU defeated Ohio State on Friday by a score of 6-2, with Lukas Hafner getting the nod in the nets over Prince Rupert's Frank Slubowski. With the win, WMU advances to the championship game of the Shillelagh Tournament

Game Number two of the tournament features WMU and Union College, with a puck drop at 2:05 PM Saturday.

Live Streaming should be available from Notre Dame website here.
Posted by . at 11:38 AM