Downtown area blocked off by RCMP owing to ongoing police investigation; reports suggest no resolution expected until early Thursday AM

Updates: 7:30 AM Roads in the affected area were re-opened to traffic in the overnight  period, however no further information regarding the incident had been released as of yet.

Later in the morning the RCMP updated their media release on the incident advising that the store and immediate area had been searched by a Police Service Dog with the scene deemed safe and released at 1:30 in the morning.

The investigation into the incident continues and the RCMP are asking anyone with information related to it, to contact the local detachment at 250-627-0764

8:00 PM:  Prince Rupert RCMP issued a news release on Wednesday evening, providing some background to the day's developments, regarding a suspicious call received by the local Safeway. (see item here)

Details remain fairly scarce regarding an incident which started early afternoon on Wednesday, with members of the Prince Rupert detachment of the RCMP responding to a call at the Canada Safeway location on 2nd Avenue West.

Shortly after their arrival at 1 PM, all roads in the immediate vicinity were closed around the Second Avenue West and First Avenue West area.

As RCMP members and Prince Rupert Fire-Rescue attended to the call, city workers arrived to lend assistance  in the re-direction of all traffic, both pedestrian and vehicle to Third Avenue, the result of which provided for a large amount of congestion in the downtown core through the afternoon and into the early evening. 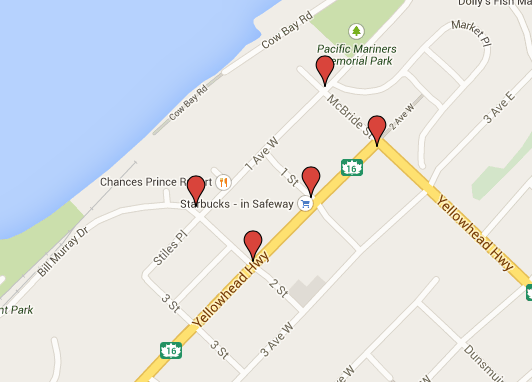 Since the early afternoon little in the way of further information has been provided regarding the incident, with no notice posted to the RCMP's Prince Rupert website, or that of the City of Prince Rupert.

Neither the City or the RCMP made use of their twitter options as the incident continued to unfold, something that might have assisted in spreading the word to avoid the downtown area through the day.

For the most part, word and rumours for the most part, spread through a range of social media options, with the CBC's Daybreak North Producer George Baker using twitter and the #PrinceRupert forum to provide the most consistent review of the situation , which was taking place one block away from the CBC studios on Third. 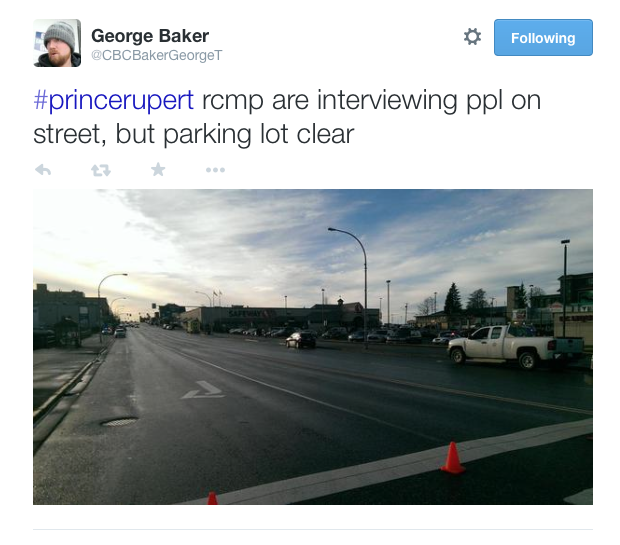 Other than the occasional note of interest from those that were passing by the scene, official information continued to be hard to find.

With that in mind, most local media outlets could only offer up occasional snippets of information, much of it variations of same theme of the early afternoon.

The weekly newspaper provided a short synopsis of the situation on its website, while the Terrace based radio station CFNR, also posted items  through its website and Facebook page.

From the website , CFNR provided a mid afternoon update with this very short review of the situation from Constable Matt Ericson of the Prince Rupert RCMP.

CFNR then followed up that interview with a Facebook notice shortly before six PM, that advises that RCMP operations regrading the still undisclosed situation will not be completed until 4 AM on Thursday at the earliest.

While it's understandable that police officials would not want to compromise any ongoing investigation, the lack of further advisories from police or civic officials is perhaps creating more issues that its solving.

Mainly in the form of local residents travelling to the area surrounding the incident scene to try and learn more on their own.

More information on the situation will be provided as it becomes available.
Posted by . at 7:04 PM