It's been a four day whirlwind of policy sessions, regional tours and resolution making as the North Central Local Government Association held its 2017 convention in Terrace through the week.

Representatives from Prince Rupert and Port Edward have joined other municipal leaders from across Northern British Columbia to review shared interests, as well as to raise their own concerns and to take in the large number of opportunities that convention week has offered.

Over 325 delegates have been in Terrace this week to take part in the convention activities, making the 2017 even the largest one in the organizations history.

The City of Prince Rupert did not indicate prior to the start of the convention how large a delegation they would be sending to Terrace for this years event.

And other than some quick thoughts at last weeks council session on the work of the Northwest Resource Benefits Alliance, Council has not offered up for city residents what, if any items that they may have wished to bring with them for consideration at the annual get together.

The 62nd edition of the NCLGA gatherings got underway on Tuesday with a number of panel discussions and presentations that explored a range of themes from Health Care, Rural priorities and Local Government leadership among the options for delegates.

Wednesday had been earmarked for tours, with the Port of Prince Rupert one of the regional organizations that played host to the delegations from across Northern British Columbia.

Other popular destinations for those looking to expand their view of the Northwest included a tour of the Nass Valley, the Lava Beds and the Nisga'a Museum, as well as the new Skeena Industrial Park in Terrace and the Rio Tinto Aluminum Smelter in Kitimat.  Others took advantage of a planned excursion to the Kitselas Canyon National Historic Site.


The official duties for the NCLGA Convention were launched on Wednesday evening with the Welcome reception where delegates had an opportunity to network and review what was ahead for the bulk of their work at the annual convention for Thursday and Friday.

May 4th set in motion the General Meeting sessions and specialty forums for delegates to attend.

Among the discussion opportunities for civic officials to investigate were Updates from the Municipal Finance Authority, a review of the work of the Independent Investigations Office, a session with Chief Derek Orr who offered up some perspectives and insights for delegates to consider.

Later on into Thursday Afternoon, delegates had opportunity to take in sessions dedicated towards how Communities can end Rape Culture, as well as an update on the progress of the Northern Development Initiative Trust and a session related to EcoAsset Management plans.

Chief Administrative Officers had an opportunity to exchange ideas at a forum set aside for them, hosted by both the CAO of the City of Terrace and the Administrator for the District of Kitimat-Stikine.

Thursday night offered up the NCLGA Banquet and Award Presentations and the Keynote address for the convention from Susannah Pierce, the Director of External Affairs with LNG Canada.

Still to come are sessions on Tourism and how to prepare for wildfires, the shipment of resources across the region and a topic on the mind of many from the Northwest at the event, that of the need for better Revenue Sharing in Northern British Columbia.

A lunch hour address from Skeena-Bulkley Valley MP Nathan Cullen will provide the lead in to the announcement of where the 2018 convention will take place.

You can get a taste of the ambitious schedule for the four day event with the overview of the convention week here.

In addition to the seminars, speeches and road trips, the delegates also have had some work to take care of with a number of Resolutions to be considered, with 25 items listed as part of the Resolutions index for this year. 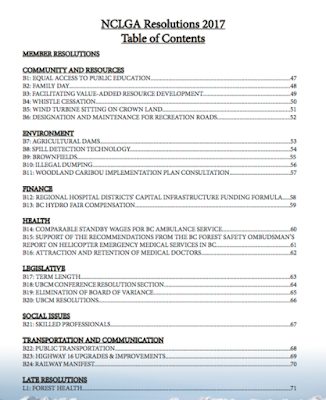 As for those discussion, neither the City of Prince Rupert, or District of Port Edward are listed in the agenda when it comes to those Resolutions to be considered at this years convention, nor has Regional District had any items added to the Resolutions index for 2017.

The Host communities of Terrace and Kitimat have however sponsored a number of items for consideration by delegates as did the Village of Burns Lake.

The full list of the resolutions to be reviewed can be found here, starting at page 41.

As well as all of the policy talk and reconnection among civic officials, participants have also had an opportunity to take in a two day Trade Show taking place in Terrace, the theme one that is focused on areas of interest for municipalities.

Delegates also received the outcome of the appointments for Regional Representation with Mayor Dave MacDonald from the District of Port Edward appointed once again to represent the North Coast, this time for the 2017-18 term. 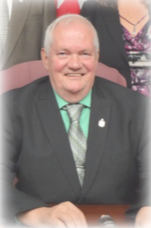 With Terrace playing host to this years event, the media coverage has featured a bit of a local angle on the proceedings, you can review some of the contributions to the information flow to this point below:

Email ThisBlogThis!Share to TwitterShare to FacebookShare to Pinterest
Labels: NCLGA convention in Terrace 2017