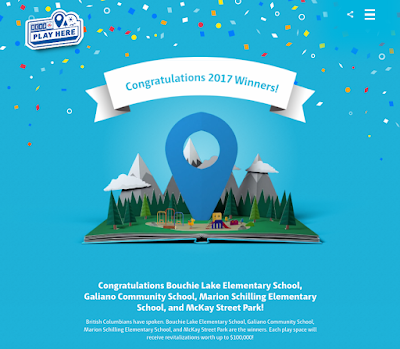 The month long clickfest of the BCAA Play Here competition has made Transition Prince Rupert's McKay Street Park plan 100,000 dollars richer, with the official results released yesterday showcasing the four communities in BC that have claimed the top prize money for 2017.

As we noted on the blog on Tuesday, Prince Rupert residents got behind the campaign from the very early days, keeping the McKay Street Park atop the daily count and holding off some strong challenges as the final days of voting came to an end last Sunday evening.

Yesterday, Transition Prince Rupert's Veronika Stewart and a large and excited group of McKay Street residents, received the good news from BCAA that the official count had put Prince Rupert to the top of the rankings. 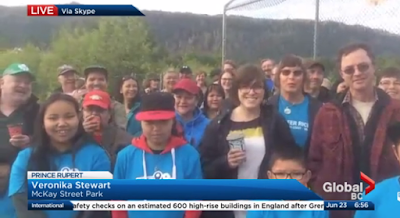 BCAA representatives will be coming to Prince Rupert in the near future to take a look at the McKay Street Park area and compare notes with Transition Prince Rupert as to how to put their re-development plan into motion.

Three other communities also have received 100,000 dollars as part of this years competition, with Bouchie Lake Elementary School, Galiano Community School and Marion Schilling Elementary School also recognized for their community efforts over the last month.

The news quickly spread across the city of Prince Rupert's win, chronicled from a range of local media sources.

Like Prince Rupert, the enthusiasm was high in the other successful communities, a snapshot of the reaction from a couple of those towns can be found below:

Marion Schilling elementary will get  $100,000 to upgrade playground
Bouchie Lake for the win


The fund raising for the McKay Street Project isn't over yet though, local residents can still dig into their wallets to help add to the funding pool for the work ahead, with a Go Fund Me Page created to help the cause.

For more background on the McKay Street concepts see the Transition Prince Rupert Facbook page and website.
Posted by . at 9:20 AM