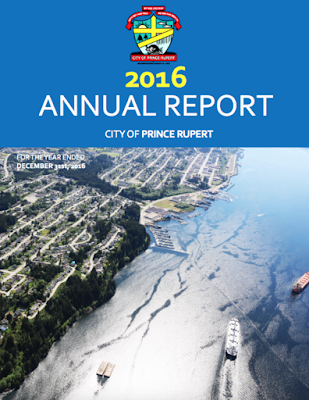 The City of Prince Rupert has completed their annual documentation of achievement and future planning for the year,  through a document known as the Annual Report.

The online presentation of the report, now available on the city website, provides an opportunity for the city to share some of the key elements of their work through 2016 and offer up a check list of sorts for what they have planned for the rest of this year and into the future.

The report was presented to City Council at the June 12th Session, with the City's Communication Manager Veronika Stewart taking the Council members through some of the key elements of the report.

You can review her presentation to Council from the City's Video Archive starting at the thirty nine minute point.

Following her report, Mayor Brain took time from the Council session to pay tribute to the Communication Manager's hard work on the project, noting that the report was one which looked much better than in previous years.

The Annual Report which includes a number of info graphic presentations, highlights some of the themes that Council members want to put forward for the community to review.

The document's year in numbers page offers up some interesting notes when it comes to the city's major focus.

Among the findings, the City is holding strong to their population forecast of 13,766 residents a number which would seem to be at odds with recently completed Census by the Federal government.

Those findings, released in February of this year, determined that the city had a population count of 12,220 for Prince Rupert, which indicated that Prince Rupert's population was still in decline.

The ongoing focus on social media by the Mayor and City Council seems to be a popular theme, with the report noting that there has been an increase in the number of "likes" that the City's Facebook page received in 2016.

Though the information flow does not offer up any numerical findings related to the Mayor's official Facebook page, which regularly serves as the main focus for the delivery of civic information these days.

The year in numbers also notes that 1080 business licences were issued in 2016 with 450 building permits issued last year.

The recent repaving work through the city gets a shout out, as does the raw water line project and decommission work ongoing at Watson Island. 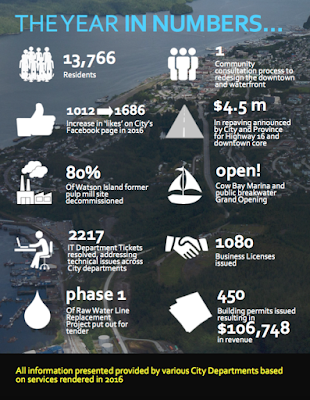 The report also features two correspondences to City residents, the first from Mayor Lee Brain, who hails the hard work of City Council, as they have brought in grant dollars and secured capital contributions through Prince Rupert Legacy Incorporated putting the money towards investment in the city.

The Mayor's letter also offers up a 'State of the City' style list, which notes some of the city's efforts related to Watson Island, while also calling attention to some irritants that the city has when it comes to revenue generation through the Provincial Port Property Tax Act and the Ridley Island Tax revenue arrangement with Port Edward. 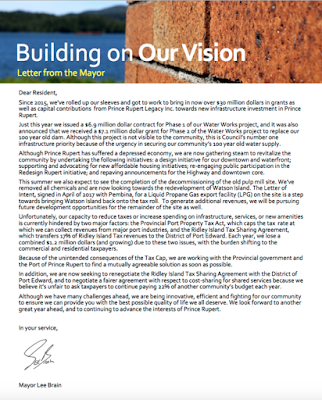 City Manager Robert Long also gets a few inches of online space, providing his view on how the process of civic governance is progressing in Prince Rupert and how the city continues to work to make employment with the City of Prince Rupert a preferred destination for job seekers.


The main thrust of the Report puts a focus on areas that Prince Rupert City Council counts in the achievement column for 2016.

Among some of those notes, the Re:Build Rupert program, completion of the Airport Master Plan, application and award of infrastructure grants for the City Water Supply system and the leasing of the Rushbrook Trail to the Kaien Island Trail Enhancement Society for redevelopment to improve waterfront access.

One puzzling element from the achievement list, is the note that Council hosted 11 Committee of the Whole meetings, where the public is invited to speak to Council on issues impacting the community. It's a curious thing to highlight, as the Committee of the Whole requirement is one that is pretty well part of Council's regular duties and is scheduled each month.

The Annual report also doesn't make note of any cancelled sessions that may have taken place, or the growing list of Closed Sessions that Council members take part in.

Though, the report did offer a nod to the recent initiative from Councillor Mirau to address how the City approaches the issue of closed sessions. 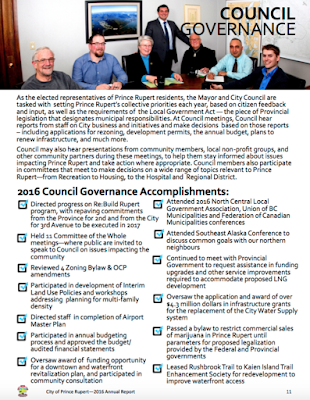 As for their checklist for 2017 Council members objectives include:

Overseeing the successful repaving of 3rd Avenue and the provincial 2nd Avenue project.

Direct staff in execution of Agreement with Pembina Pipelines for a small-scale Liquid Propane facility to be developed at Watson Island. As well as to direct staff in continued pursuit of development opportunities for the remainder of Watson Island.

Direct staff to continue to work on waterfront access plan and liaise with CN surrounding the closure of the beach adjacent to Kwinitsa Station.

Continue discussions with neighbouring First Nations, other levels of Government and project proponents on the Tsimshian Access project. 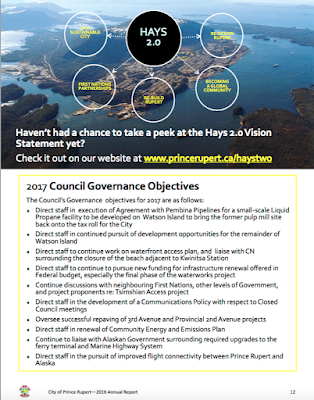 Some other interesting items of note from the Annual report put some attention towards the city's two emergency service providers.

With the Finance Department noting that among the 2017 objectives include formulating public engagement materials for the construction of a new RCMP building.

The Fire and Emergency Services objectives also include planning for a new Fire Hall, the ongoing upgrade to radio communications for the Fire Service and delivery of a new pumper apparatus this month.

The Finance Department also notes that they will continue with negotiations related to the Ridley Island Tax Share Agreement, expand an analysis on the implications of the Port Property Tax issue and look to see BC Transit implement service to the Prince Rupert airport. 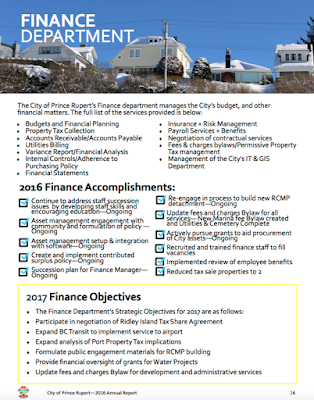 How the City spends your tax dollars also receives a graphical review, with the Police and Fire Services accounting for 39 percent of all civic spending.

The full scope of the Annual Report which reviews all of the city departments can be accessed here.
The public can offer up their comments on the findings in the Report as part of a public participation session scheduled for the June 26th Prince Rupert City Council Session.

For more notes related to the June 12the Council meeting see our Council Timeline feature here.

Further background on City Council discussion topics can be found on our Council archive page.