CFNR to expand its network in 2018 with Vancouver station debut 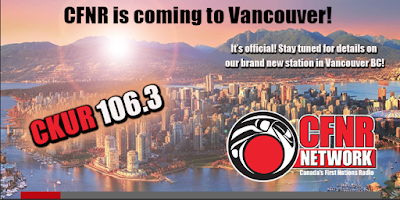 While the Northwest takes some time this Wednesday to celebrate National Aboriginal Day with communities across Canada, a note of celebration for a local communication company that is making some radio waves far beyond the region.

Last week, Canada's First Nations Radio, known as CFNR on the North coast, received some good news, with the Canadian Radio-Television and Telecommunications Commission granting CFNR a licence for a new start up radio station in Vancouver.

That means that a variation of the popular CFNR sound that is found on radios (and streamed through computers) across the Northwest is about to go Big City, with the Terrace based company taking on some impressive competition to secure the licence, one of five new radio licences issued to serve Indigenous people in urban communities.

The new station will broadcast as CKUR and will be located at 106.3 on the FM dial in Vancouver. Should all go well, the station will debut in the very competitive Vancouver market in the summer of 2018.

In their decision, the CRTC called on Northern Native Broadcasting presence in the province through the CFNR network as key to the element of confidence that the CRTC looks for as they licence radio stations.

After examining the applications by NNB and FPR in light of the factors and criteria set out above, the Commission finds that while both are quality applications that meet the criteria set out in Broadcasting Notice of Consultation 2015-399, the application by NNB better meets the needs of the urban Indigenous community in the Vancouver market. NNB proposed higher levels of local programming and Indigenous-language programming.

In addition, it currently has a presence in British Columbia with its Type B Native radio station CFNR-FM, and as such can benefit from various synergies. Further, its proposed business plan is more modest than that filed by FPR. Finally, NNB has committed to maintaining current relationships and developing new relationships with communities that would form its target audience, which would be conducive to NNB delivering programming that is relevant to that audience.

As part of their application, Northern Native Broadcasting put a focus on spoken word programming, something that appealed to the CRTC blue print for what kind of service they want to see.

NNB committed to broadcast each broadcast week 25 hours of spoken word programming, including 6 hours and 45 minutes of news, and 101 hours of musical programming. At least 25% of all musical selections broadcast would be devoted to Indigenous music, and 5% would be in Indigenous languages.

The CRTC also pointed towards the range of support that the CFNR application had found from First nation communities both in the North and south.

NNB’s commitment to serve Indigenous communities in Vancouver was reflected in the letters of support submitted by leaders and officials from the Gitmaxmak’ay Nisga’a Society, the Musqueam Indian Band, the Squamish Nation, Moricetown Band Council, the Kitsumkalum Indian Band, and the Kitselas First Nation. In particular, the letters cited NNB’s experience in broadcasting throughout northern British Columbia and its plans to provide links to the 65,000 Indigenous people living in Vancouver to their home communities while providing local content from a distinct perspective.

You can review the full licence approval decision from the CRTC Website here.

CFNR celebrated their success and outlined some of the hard work that is ahead to launch the station with this report from last week.

The Vancouver Sun provided some further background on the successful licence application with this article from June 15th.

CFNR is currently hosting a survey to determine some of the programming elements that Vancouver residents might be looking for from the new station.

For more items related to Communications across the Northwest see our archive page here.
Posted by . at 2:32 PM

Email ThisBlogThis!Share to TwitterShare to FacebookShare to Pinterest
Labels: CFNR to expand to Vancouver