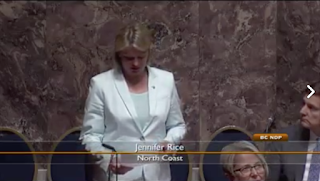 The political machinations currently at play at the British Columbia Legislature are making for some high drama in Victoria, but when it comes to tangible movement on major issues, the wheels of governance are moving at a more glacial speed.

North Coast MLA Jennifer Rice made her first comments of the post election period in the Legislature on Tuesday and used her time in the House to call for the Christy Clark government to step aside, to allow for the NDP to move forward with many of their policy initiatives, including working towards replacement of aging schools across the province.

Ms. Rice spoke to the need for a replacement for the Prince Rupert Middle School and recounted some of the recent discussion on the theme and concerns from the community, as well as the desire that the project move forward.

Going further, the North Coast MLA then tied the issue into the ongoing efforts of the NDP to force a confidence vote on the status of the current BC Liberal government.

" The School District knows its a problem, the Minister knows its a problem but he refuses to act, through you Mr. Speaker, will the Premier call a confidence motion in this House today, so that a new government can get to work fixing schools across this province"

For his part, Education Minister Mike Bernier reviewed some of his recent travels across the province to explore the concerns from local School Districts and in the case of the Prince Rupert Middle school noted the current seismic upgrading plan for the building and the funding in place for future development of education facilities across the province.

You can review the discussion from the Legislature on Tuesday from Ms. Rice's Facebook page.

Political observers in Victoria note that a vote of non confidence in the BC Liberal government is expected to be introduced by the NDP by the end of the week.

That move will deliver the next step in the political drama in the capital, but is also something which will leave any tangible legislation on a range of important issues left to simmer on the back burner while the political manoeuvres continue on.

For more notes related to the work of Ms. Rice in the Legislature see our archive page here.

A wider review of the British Columbia political scene can be found on our D'Arcy McGee portal
Posted by . at 10:00 AM

Email ThisBlogThis!Share to TwitterShare to FacebookShare to Pinterest
Labels: MLA Rice in Legislature calls for confidence vote on BC Liberal government