RCMP Cell block upgrade up for discussion at Council tonight


Kicking the discussion for an RCMP replacement building down the road as they did four years ago, is providing for yet another headache for the Prince Rupert City Council of today, as the current council reviews a situation at the local detachment that can no longer be put aside.

The long drawn out approach towards delivering a new RCMP detachment for the city is one that has all but vanished from public conversation at Council meetings in the last few years, but it is clearly a topic that is going to need to be resolved sooner rather than later, while a more immediate concern reaches what can only be described as a serious situation.

While we still await some further news from the Mayor and his Council on the progress towards a new RCMP detachment for the city, the existing structure requires some immediate attention as the cell block at the Sixth Avenue West detachment is not in compliance with national standards.

Towards that concern, Council will be reviewing a report from Corinne Bomben, the City's Financial Officer tonight, a document which outlines the various options for the City.

Among the themes for consideration when it comes to the dire nature of the current building.

Closure and Transport -- One suggestion is that the existing structure be deemed condemned and prisoners transported elsewhere in the province for holding, which would require transport by vehicle or air and diminish the local force personnel and incur overtime, while the City would also have to pay for housing the prisoners elsewhere, with an estimated cost of over 1 million dollars.

Construction of a Temporary Facility -- taking the form of an emergency cell block, though the report notes that the cost associated with such project would be in excess of the estimated minimal modifications necessary to the current cell block.

Guard Increase -- The third option is the prospect of hiring more guards to watch the prisoners and respond to safety events, that would in effect double the existing guard until a new building is constructed, though it is noted that could be cost prohibitive and does not address the safety concerns.

Should Council choose to continue to house inmates in the community, a process would move ahead which could see a range of consulting services required before any renovation of the existing facility takes place, the cost of those consultations has been estimated by the Finance Department to be at the 100,000 dollar mark.

City staff is asking Council for direction on the path ahead, recommending that the City move forward with the cell block consultation plan, which would determine how much the construction costs will be and to decide how to further approach the issue.

As part of the report, Council has been advised that should Council move forward with the cell block reconstruction option, the associated financial increase on the mill rate for the life of a proposed short term loan would be at 1%.

That impact would not take effect until the 2018 budget.

The report also outlines how the use of the Prince Rupert Legacy Dividends would not be considered wise as there is no long term benefit to the current or future community, nor does the Finance department recommend using any accumulated surplus in this instance.

You can review Ms. Bomben's full report below: 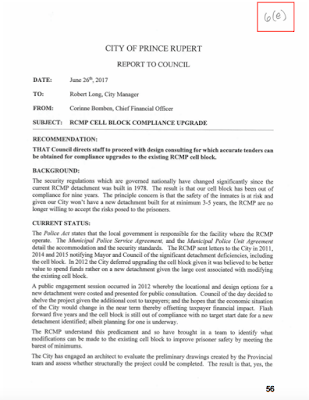 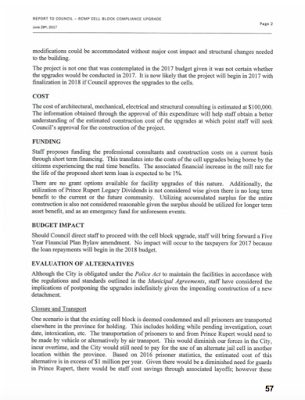 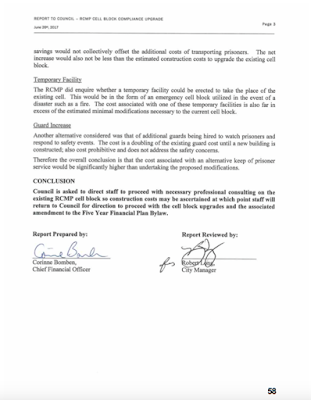 Council will discuss the issue further tonight as part of their Regular Council session agenda , starting at Page 56.

The topic could also offer up an opportunity for an update by the Council as to what their longer range intentions are towards a new RCMP facility and to outline for the public the status of the issue.

Email ThisBlogThis!Share to TwitterShare to FacebookShare to Pinterest
Labels: Council to consider options on dire nature of RCMP detachment cells