The official announcements won't come until later this week, but if the rolling totals of the last month were any indication, Prince Rupert residents and supporters from far beyond the city limits took to their computers in large numbers as part of the BCAA Play Here competition.

Prince Rupert's McKay Street Park proposal was one of ten projects up for voting and as the Sunday midnight deadline for voting had loomed, the local park had received over 94,000 plus votes giving it a slight margin ahead of a Quesnel proposal.

Mayor Lee Brain took to his Facebook page to salute the hard work of those that helped put the Prince Rupert park to the top of the listings, though noted that the official standings won't be released until the end of the week. 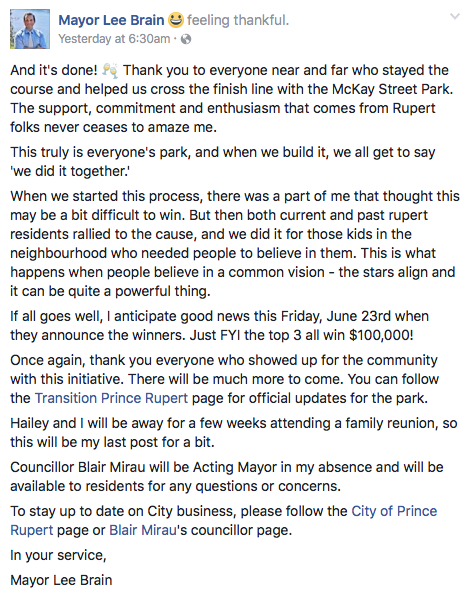 And while Prince Rupert will be seeking the bragging rights, securing the 100,000 dollar in prize money should be within sight, as the three top finishers all will receive the same amount of funding for their efforts.

The McKay Street project which is being spearheaded by Transition Prince Rupert is also soliciting funding through a Go Fund Me page, though it would seem that Prince Rupert supporters may be quick to click with a vote, but perhaps are a little harder to separate from their cash.

You can add your financial support to the McKay Street proposal totals here.

Updates on the future plans for the McKay Street project can be found on the Transition Prince Rupert Facebook page and website.