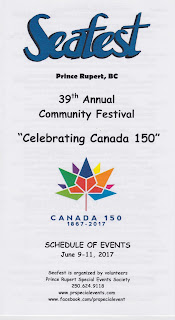 Seafest Weekend is offering up a range of entertainment with music one of the main attractions over the course of the three day festival.

The symphony of sound starts off on Friday morning at the Rupert Square Mall, shifts to Mariners' park in the evening and then on to events listed for downtown and around the city on Saturday and to the final day of the waterfront events on Sunday.

Along the way there will be a little bit of something for everyone with musical stylings ranging from Contemporary Christian, to Jazz, Country and Rock all making up for the musical review of the weekend.

Below a schedule of the musical offerings and other entertainment options ahead.

The Gitmaxmak'ay Nisga'a Dancers and Society is organizing the event, with the Opening taking place at 10 AM with the event running through until 9 PM. Multi-cultural dance groups will perform hourly, with the popular Drum Drill event set for 8PM.

More on the Salmon Festival can be found from our feature here.

Coast Tsimshian Academy School Band at the Rupert Square Mall -- The popular community band from Lax Kw'alaams kicks off their time at Seafest with a performance on the upper floor of the Rupert Square from 10 AM to 12:30.

The band features the talents of students from Grades 4 to 8 at the Academy.

Sponsor for the event is the Rupert Square Mall.

Dr. Von Houligan's Carnival of Calamaties -- Some Free family entertainment is set for the corner of McBride and 3rd West as the travelling show from Alberta provides for an hour and half of magic, juggling, fire-breathing, balancing acts and much more. The event takes place under the Big Tent from 6 to 7:30 PM.

Music at Mariners -- The Seafest weekend kicks off in fine style with a trio of acts celebrating the Northwest musical scene taking to the outdoor stage at the city's downtown park overlooking the Prince Rupert Harbour. Scheduled to take to the stage include: Surfin' Dudes, Nobody Told Rachel and Nova

Residents are invited to bring a blanket or a lawn chair and to make gumboots one of their fashion accessories. The Show starts at 7:30 PM and continues through until 10:30 PM.

Sponsorship of the Evening of Music at Mariners include: Pacific NorthWest LNG

Music in the Parade -- The Annual Seafest Parade will feature a number of musical presentations as it travels along Second Avenue West and then back down Third West to the Court House.

The parade starts from the Court house at 11 AM.

Music will also be a featured part of the downtown Third Avenue events through the day at City Hall with performances scheduled from 1 until 5 PM.

The parade is organized and Sponsored by the Prince Rupert Special Events Society volunteers.

Dr. Von Houligan's Carnival of Calamaties -- Some Free family entertainment is set for the corner of McBride and 3rd West as the travelling show from Alberta provides for an hour and half of magic, juggling, fire-breathing, balancing acts and much more. The event takes place under the Big Tent from 1 to 2:30.  Additional shows take place at3:30 to 5:00 PM and 7:00 to 8:30 PM.

Wheelhouse Beer Gardens -- One of a number of evening events to hop around to, the local craft brewery hosts the annual Beer Gardens with funds raised going towards the BC Burn Fund. Food vendors will be on site to satisfy any munchies.

Events kick off at 2 PM and continue through until 10 PM, it is limited to those 19 years and older.

Sponsored by the Prince Rupert Lester Centre of the Arts

Seafest Worship Celebration -- Contemporary Christian music and standards will provide the soundtrack to Sunday morning's event set for the Kwinitsa Station Bandstand at Rotary Waterfront Park, the music starts at 11 AM and continues into the noon hour.

Bandstand Entertainment -- The Kwinitsa Bandstand comes alive again at 12:30 featuring a number of regional entertainers among those scheduled to appear on Sunday are Men Who Listen, Danny Sklapsky and many more.


A full overview of Seafest Events can be found here.

Email ThisBlogThis!Share to TwitterShare to FacebookShare to Pinterest
Labels: Seafest music and entertainment 2017