A new program which started streaming through the Netflix service in late March is making for much in the way of discussion for School Districts across British Columbia, with some of that conversation now beginning to make its way into the dialogue for North Coast families.

School administrators and counsellors from SD52 have taken note of the new program "Thirteen Reasons Why" and now are looking to approach both students and parents with some background to consider when it comes to the viewing of the program.

In her letter for families, Ms. Jones outlines the general theme of the program which has become extremely popular with many teens and pre-teens in the community, noting that it has also become controversial owing to its difficult subject matter and potential impact on children.

The program which is a fictionalized account of a high school student who tragically ends her life, has explored a range of themes from bullying, drug use, sexual assault and other social issues.

Since it's arrival to the Netflix system, school officials across Canada have expressed concerns at how youth who may struggle with similar challenges may view the program and it's approach to the various themes.

It was some of those same concerns that SD52 touches on with their information notice.

Also of concern to school officials at the local level is how it portrays adults as unsupportive, places blame and memorializes the individual who kills herself.

As part of her comments for the community, the District Superintendent also provides some suggestions for families to consider when it comes to
the program.

Advising that parents should watch the series, with even one episode providing for some awareness of the issues that are raised.

Also if a child in your family is watching the series, she suggests that you have a conversation with him/her about the content and even possibly watch the series together.

As well, parents should encourage their children to speak with an adult if they feel overwhelmed or depressed.

You can review the full letter to families below (click to enlarge): 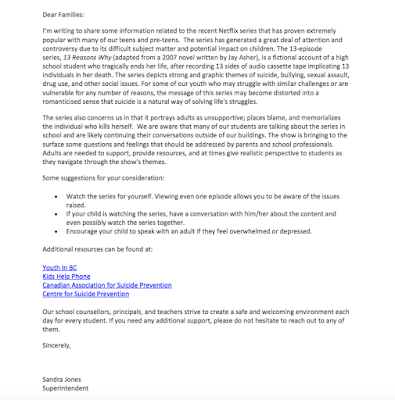 In addition to the letter to families, the School District provides a number of links for families to follow up with should they require additional resources on the themes from the series.

To conclude the correspondence, Ms. Jones also notes that the School District counsellors, principals and teachers all strive to create a safe and welcoming environment each day for every student.

Reminding parents and students that if they need any additional support that they should not hesitate to contact any of those resources available in the school system.

Some background on the Netflix program can be reviewed here.

The series was adapted from the Novel from 2007 by author Jay Asher,  notes on the book and other material related to it can be found here.

School administrators and Parents will also want to take note that the program has already been renewed for a second season, which would suggest that the conversation will be one that needs to continue long after the viewing is done for this season.

As noted above, the show has found some controversy and reaction to it has explored a number of different opinions as more and more people become aware of the program.

Some of the discussion to this point can be reviewed below:

More notes on issues related to education in the Northwest can be found on our archive page here.

Email ThisBlogThis!Share to TwitterShare to FacebookShare to Pinterest
Labels: SD52 approach to Netflix program 13 Reasons why