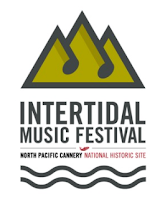 Music will be returning to Port Edward's North Pacific Cannery Historical site this summer, with the popular North Coast attraction working out their plans to host a Music Festival in July part of their celebration of Canada's 150th anniversary.

The Intertidal Music Festival is planned for Saturday July 15th and ties both the nation's 150th birthday and 150 years of salmon canning in British Columbia together.

Festival organizers recently issued a call for participants for the mid summer event and from those applications have put together a program that will feature over a dozen bands and artists from both the Northwest and Lower Mainland.

The day long event will feature two large performance stages and one smaller one for the line up of performers. Planners anticipate that the event could draw over 1,000 guests out to the Port Edward site to take in the day's musical themes.

The line up for the festival looks as follows:

In addition to the music, the Cannery Cafe will be serving up its famous menu and three of Prince Rupert's growing food truck cuisine options will be on site as well.

Prince Rupert's Wheelhouse Brewery will also be introducing their Canada-150 Red Ale at the festival and organizers have numerous prizes and exciting giveaways planned for festival goers.

Early bird tickets for the event are on sale until June 15th.

Ticket prices range from a 15 dollar early bird youth price to 75 dollars for a family package and are available through the Event Brite website which is promoting the Festival.

With the anticipation of a large crowd in attendance for the event, there will be no parking available at the cannery site on July 15th, with shuttle buses available from a staging area in Port Edward throughout the day.

More items related to North Coast Events can be found from our archive page here.
Posted by . at 1:01 PM