City of Prince Rupert puts Landfill project out for tender


The next significant project for the Ridley Island Land fill site is at the request for tender stage as the City of Prince Rupert releases it's prospectus for the work ahead to close off one segment of the landfill and create a new cell.

In documentation posted to the BC Bid website, the City has provided an outline of the scope of work that will be required of the successful bidder.

The work to be done is identified as the Prince Rupert Landfill Leachate Lagoon Construction Project.

Among some of the tasks listed for the work ahead includes site preparation, excavation, drilling, blasting, shotcrete application and other earth works.

Also included in the overview is work related to HDPE and PVC pipe work, geotextile and geomembrane installation.

The work ahead will also include the decommissioning and reuse of existing infrastructure including pipes, manholes and casings. It also includes electric actuated valves, surface aerators, aluminum gangways, anchors, supports and bollards and includes work related to the electrical transformer with auxiliary equipment, electric kiosk and infrastructure, trenches, conduits and cables is also on the to do list. 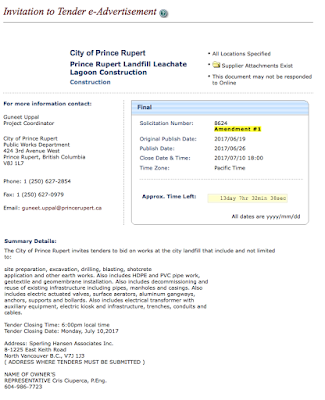 Bid submissions are being directed to a consulting firm in North Vancouver, with the deadline for bids noted as July 10th. A mandatory site visit has been arranged for those interested in the project and has been scheduled for Tuesday, July 4th at the Ridley Island facility.

The timeline for the process ahead would see notice of award delivered by July 14th, with Notice to proceed expected buy July 21st.

The notes from the city's information package note that the liner installation related to the project is to be in place by August 25th, with substantial performance on the work expected on or before October 27th of this year.

You can review the full documentation for the project from the BC Bid website.

The need for landfill expansion first appeared on the agenda for Prince Rupert City Council back in 2014. Some of the notes related to the ongoing initiatives when it comes to our waste disposal site can be found below:

A look at more of the major infrastructure projects underway with the City can be found on our archive page here.

More background on City of Prince Rupert items can be found on our Council Discussion page.
Posted by . at 11:05 AM

Email ThisBlogThis!Share to TwitterShare to FacebookShare to Pinterest
Labels: City of Prince Rupert Landfill project out for Bid