The Prince Rupert Port Authority looked back at 2016 and offered a glimpse into the future as well on Tuesday evening, as the region's largest employer reviewed their port operations and the impact that they have on the community.

Port Board Chair Bud Smith offered up some opening remarks to kick off the two hour presentation for those in attendance at the North Coast Convention Centre, framing some of the main themes that would make for much of the night's discussion.

Mr. Smith provided for the overview from the Chair and an explanation of the focus of the Board, as well as the larger vision and ongoing desire to build on the Port's success of the past, (PRPA is currently listed as the third largest port in Canada) and outlined how the Port continues to work to expand the Prince Rupert footprint for the future.

Port President and CEO, Don Krusel then took to the podium and, delivered a comprehensive snapshot of performance levels for the various terminals that make up Prince Rupert's gateway to the world.

Fairview Container Terminal made for a good portion of the early focus on the night, the Port CEO showing some tangible pride in the Terminal that is set to celebrate it's 10th anniversary and delivering a glimpse at the future for the shipment terminal which will see a recent expansion project come into service shortly.

For his look at the container terminal's impact on the community Mr. Krusel took some time to review the history of the port and how Fairview has changed the nature of both the port operations and added significantly to the economic rebound for Prince Rupert.

He returned to the theme of how the Port of Prince Rupert has become the fastest growing port in the nation, with only Vancouver and Montreal providing levels higher that the North Coast port.

As well, to bring home the large scale importance of port operations in the region, port statistics explain quite clearly that when it comes to employment, Fairview has had a major impact on the North Coast jobs picture, with Mr. Krusel observing that in 2006 the longshore board hosted less that 80 positions, ten years later there are now nearly 800 positions listed.

As for direct employment related to Port development, those numbers have doubled over the last five years, with 3,000 jobs now serving port movements, with in-direct employment created through the port's related activities estimated to be at the 5,000 mark.

To further expand on those statistics Mr. Krusel noted that at this point, some 23 percent of the labour force of the region now receive a pay cheque through Port related operations or industries.

To launch the overview of Port operations from 2016, Mr. Krusel revealed that the port maintained volumes at 19 million tonnes, which was down 4% over the last year.

However, to put that decline into some perspective, he pointed out that two significant factors had contributed to that slight decline, the bankruptcy of the Korean Hanjin shipping line and the continuing struggles of the Canadian coal industry. 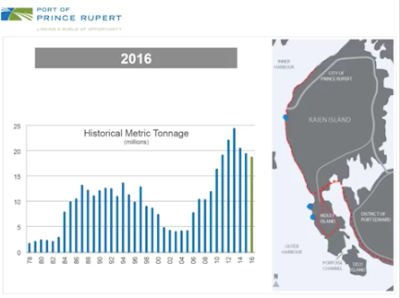 When it came to the review of recent movements through Fairview, the Port CEO noted that Container shipments were down by around five percent in the last year, however as he observed the Hanjin Shipping line bankruptcy process in the final quarter of the year was the main factor contributing to that overall slippage.

Coal as well continues to be an ongoing commodity in decline in BC, with shipments through the port down ten percent overall last year, but again that would be a condition facing all of Canada's ports as the coal industry continues to struggle.

Though, as 2017 has progressed, Mr. Krusel noted that there is some positive news to be found from the Northeast coal fields with some operations returning to operations over the last six months.

Diversification however is proving to be a helpful antidote to the concerns on declines, with the port's established terminal options now getting a boost by a number of new ventures with the Port pointing towards the Westview pellet terminal as one area where significant growth was found in the last year.

As well, the Port CEO took note of a number of the prospects for the future, including the Alta Gas Terminal for Ridley Island, a new lumber loading facility and a specialty grains terminal operation on the waterfront will all offer continued opportunities to expand the shipping options offered at the Port of Prince Rupert.

The Port's involvement with the Community was also a theme for the APM, with Port officials outlining some of the high profile community projects that they have provided funding for over the last year,

The latest contribution to that fund was announced on Tuesday, with the Port putting forward just over one million, nine hundred thousand dollars towards community initiatives across the region. 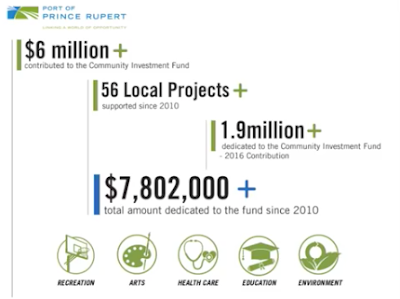 The latest contribution is part of the ongoing commitment to the region that has seen the Port deliver close to 8 million dollars in funding, since they launched the Community Investment Fund over the last seven years.

You can review many of those projects from our archive page here.

Much of the rest of the presentation was turned over to a number of Port officials who provided some background on finance, port operations and future projects, with much described as in the works for Ridley Island, including a Logistics park on the north side of the Ridley Island Access road.

As well, Fairview terminal will soon be putting in place a refrigeration service program that could offer some export opportunities for local seafood processors across the region.

One item that should capture the attention of Prince Rupert city Council officials was the Port's planning for a connector road from Fairview container facilities to Ridley Island, the roadway which would travel along the shoreline south to Ridley.

The new access route to be known as the Fairview Connector project is considered a top infrastructure priority for the port and would provide for some significant relief for the downtown area, redirecting traffic away from the city centre.

The port noted that they hope to have construction on that bypass route underway later this year. 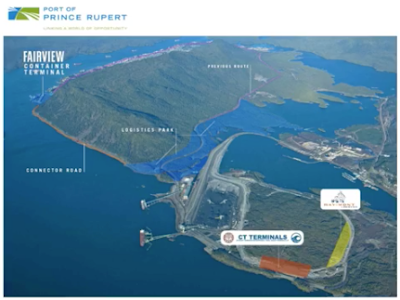 A panel discussion of sorts through the final hour of the presentation picked up the theme of the port's work, with Port President and CEO Don Krusel handling much of the work answering questions, with the audience participating online and in person at the Convention Centre.

A good portion of the inquiries of the panel involved how the Port may become more involved in providing assistance to the City of Prince Rupert and what future plans that may be in motion for development of municipal infrastructure in the area.

On the topic of its relations with the City, Mr Krusel noted that each year, the various port facilities contribute some six million dollars in tax revenues per year to Prince Rupert and Port Edward.

As well, the Port noted that that they will be making some infrastructure assistance available to the City of Prince Rupert, with Mr. Krusel outlining the ports intention to direct 1.5 million dollars to the city to be used on a matching basis, for use towards some of their infrastructure check list over the next five years.

When it comes to the nature of some of that investment and how the Port can assist the city, the Port CEO called attention to a committee that the Port is part of with City officials on rebuilding the city's infrastructure.

It was also noted that the Port had already contributed funding to the city of Prince Rupert to assist with the preparation work for the Second and Third Avenue Paving projects. The port at the time having partnered with the city to cover the costs of the curb work and manhole cover preparation prior to the paving of the road earlier this spring.

Another main feature of Tuesday's meeting was the Cow Bay area near Atlin Terminal, with the Port outlining some of its plans for redevelopment of that area, with plans still in motion for a second office building on the waterfront area, with a community gathering space also still part of the Port's blue print towards the future.

More immediately, work continues on the Atlin Parking lot, which will reconfigure that space with a wider pedestrian access and beautification plan.

A look back at our North Coast Review archives outlines some of those prospects for the years ahead.

The Port will also be reclaiming some of the space in the Atlin Terminal itself for its office needs, with Mr. Krusel noting that they are working with the current tenant the Ice House Gallery to find a suitable replacement location to showcase the work of the North Coast's artistic community.

Following the meeting, those in attendance had an opportunity to move to other areas of the Convention Centre to explore a number of presentation stations, staffed by Port employees who explained further some of their work at the Port. 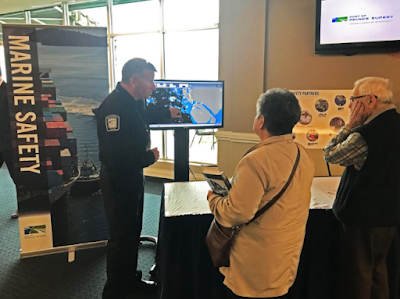 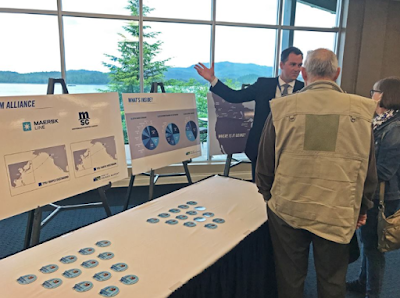 The live stream of the APM is available on the Port's Facebook page here.

You can review the Annual Report through the Port's website, those that take the time to do so over the next week can also take part in a draw for an iPad mini.

Details on how to participate in that opportunity can be found on the final page of the Annual report presentation.

For more items related to the Port of Prince Rupert see our archive page here.
Posted by . at 11:58 AM