Following the advice of and request from Fire Chief Dave McKenzie, Prince Rupert City Council has voted to include the launching of Sky Lanterns as part of the prohibited portion of their fireworks bylaw process.

The lanterns which have become popular at weddings, anniversary parties and other social events have raised concerns from emergency service personnel across North America for the fire danger that they pose for communities.

The final reading of the proposed ban came at Monday evening's City council session, with Councillor Barry Cunningham also reversing his previous position on the colourful, but in some cases dangerous flaming floating lanterns.

As we noted on the blog earlier this month, Council reviewed the Fire Chief's report and request for the ban at the June 12th Council session, at which time Councillor Cunningham had suggested that considering a permit process related to them might be the better approach to manage the issue.

You can review our notes and the Fire Chief's report from the June 12th Council session here.

However, as he noted at Monday night's Council session, he had done some further research on the Sky Lanterns and the concerns about them that have been raised in other communities and now was fully on board with a local ban.

Council then voted to pass the motion, moving forward the ability to add them to the current fireworks prohibitions.

One group that is happy with City Council's decision is the Royal Canadian Marine Search and Rescue Station 64, which outlined their concerns related to Sky Lanterns in a Facebook post following Monday's Council session, noting that often the floating lanterns have been mistaken for emergency flares. 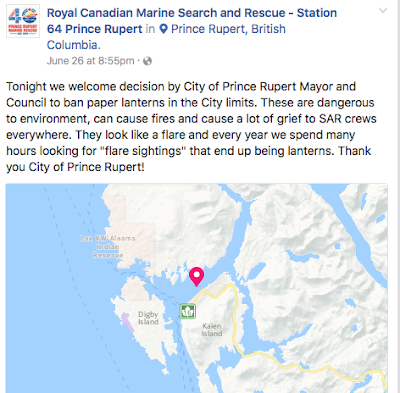 The short discussion related to Council's decision can be viewed from the City's Video archive starting at the 53:30 minute mark.

Further background on Council issues can be examined on our Council Discussion page.

For some of the files of Northwest Emergency Responders see our monthly archive here.