The financial disclosures of June continue for the North Coast, with Regional District having released their Statement of Financial information for 2016 and with it, the list of compensation for those officials that have either been elected, or appointed to the regional government collective.

For Mayor Lee Brain, his Regional District duties through 2016 provided an additional 12,927 dollars to his income stream, a boost to the previously released Prince Rupert salary listing.

Mr. Brain also claimed expenses of $287 through his Regional District work in 2016.

As we outlined on the blog back in early June, the Mayor was listed in Prince Rupert's SOFI declarations as having received $61,318 in compensation from the City, while claiming $17,274 in expenses for the last year.

The Regional District bump moves the total combination of Remuneration, Taxable Benefits and Expenses for Mr. Brain through 2016 to the $91,806 mark, placing him at the top of the list when it comes to compensation levels for municipal or regional elected officials on the North Coast.

Councillor Kinney also sees a significant jump for his civic duties, with Regional District providing for an additional 13,000 dollars to go along with his City Council salary of 13,775 dollars.

However, when it comes to spending, Mr. Kinney remained rather parsimonious, having claimed no expenses through his work with Regional District.

While Councillor Cunningham received $346 for his work at the Regional body, with No expenses claimed in 2016. 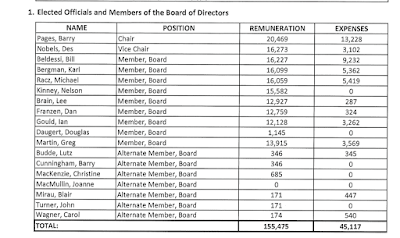 While Prince Rupert's SOFI listings provided for a review of 65 civic salaries for those making over $70,000 last year, only five employees of Regional District were listed in the remuneration tables, with all five making over $89,000 mark.

The full SOFI report for Regional District can be reviewed from the Agenda from the June 16th District meeting, the report starts at page nineteen of the documentation.