Piles, upon piles of garbage at the recycling centre making for conversation theme on Facebook

The theme of respect for our surroundings is one that had become an ongoing issue long before the Kaien Island Regional Recycling Centre introduced its after hours bins at the Kaien Road facility a few years ago.

And like it was then, the main observation today is, that when it comes to that respect, a number of those of us who call this region home aren't showing much of it. 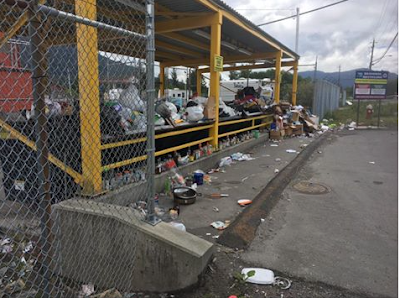 The photo above was posted to the Facebook page Prince Rupert Customer Review by Grainne Barthe and from the time Ms. Barthe clicked on post, it has spawned an energetic debate about how North Coast residents do their recycling, with many it would seem inclined to dump and run, rather than schedule their recycling time for when the centre is open for business.

The concept of the introduction of the after hours bins was one which would accept a few household items that residents might have stored up and could drop off in between those times when the Centre is open for regular business.

However as the photo would seem to indicate, more than a few folks are just tossing large volumes of items onto the loading docks or surrounding pavement, leaving it to the weather gods as to final distribution.

In the past, the situation seemed to be more prevalent during the course of long weekends, when the Centre is closed for that one extra day, however as the recent conversation would indicate, the problems with overflowing garbage seem to be more and more constant.

And now as we head into the warmer months the situation seems to becoming more and more prevalent regardless of the day as North Coast residents apparently start to clean up their own properties.

The Facebook discussion is spawning some interesting debate on how the City and Regional District should approach the topic of recycling and what measures might be used to try and rein in the apparent slovenly ways of some who make use of the Kaien Road facility.

Among some of the suggestions to be offered up so far,  closing the after hours option down, extending the hours of service at the Centre and a call for the return to the blue box recycling program for homes across the city.

As for the more immediate problem of the giant mess that staff have to clean up, the installation of cameras at the after hours bins has been suggested, in order to identify those that may be abusing the situation.

Over fifty comments have been added to the discussion to this point, including thoughts from City Councillor Wade Niesh and Prince Rupert and District Chamber of Commerce head Michelle Bryant-Gravelle.

You can review the theme and contribute yourself here.

As we outlined on the blog earlier this month, Regional District officials are currently reviewing their Strategic Priorities Fund which would see a number of renovations take place at the Kaien road facility, more on those plans can be examined here.

More items related to the North Coast Regional District can be reviewed here.