They make for a fairly fascinating visual display in the night sky, but as other communities have found, the growing popularity of Sky Lanterns is also making for a significant fire risk.

And with that in mind, the Prince Rupert Fire Department is looking to ban the launching of them within the city limits.

In a report to be delivered to City Council at Monday's Council Session, Prince Rupert Fire Chief Dave McKenzie will advise Council that the Department has been receiving an increase in inquiries related to the use of the lanterns and in a proactive measure would like to add them to the list of prohibited fireworks within city limits.

The Sky Lantern is a small hot air balloon made out of paper, lit by a small candle which are released into the air. Once in the air they are considered to be an uncontrolled fire source that can cause a fire.

As the Fire Chief notes in his report, as they are unpredictable in their path, they can land anywhere and do extensive damage. He notes that many locations in Canada and the United States have banned the use of them owing to concerns over safety.

The report will find Chief McKenzie asking Council to add them to the prohibited list, with Council then to consider providing for three readings to the Fireworks Regulation Amendment Bylaw with Monday's meeting.

The fire department has seen an increase in the amount of people inquiring about the use o f Sky Lanterns in the City. Currently, our fireworks bylaw does not include the prohibition of these in the City. There are a number o f concerns associated with the use o f these lanterns, which is why they need to be regulated.

You can review the full report below, it is part of the City's Agenda package for the June 12th Council session. 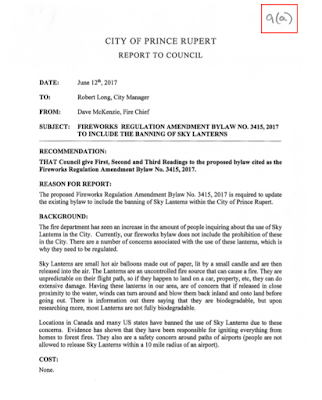 The YouTube portal has a large collection of Sky Lantern videos showcasing the creations to taking to the sky, one of the many available for viewing can be found below: