Prince Rupert Fire/Rescue were quick to the scene of an early evening fire on Tuesday, with crews attending a fully involved fire at the corner of Fulton and 8th West shortly after 9 PM.

Videos and notes posted to a range of social media platforms highlighted the work underway by firefighters as they battled the blaze.

Some of the visual review showed flames licking at the roof of the multi family residence, as the Fire Department worked the fire members of the Prince Rupert RCMP were looking to take account of the residents of the building and had roads blocked surrounding the scene and were keeping the growing crowds at a safe distance.

Paramedics were on stand by had they been required.

All accounts to this point suggest there were no injuries suffered as a result of the fire, though damage to the property does appear to be extensive.

Members of the Prince Rupert RCMP remained on the scene through Wednesday morning, watching over the residence. 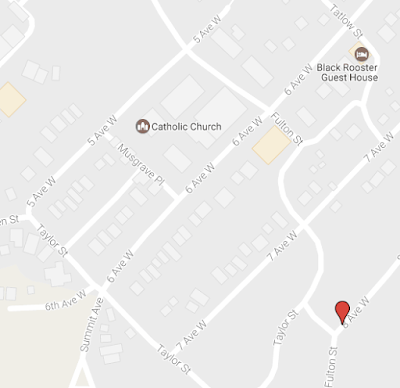 Email ThisBlogThis!Share to TwitterShare to FacebookShare to Pinterest
Labels: Fire at Fulton and 8th June 6