Lessons learned by City Council in both 2015 and 2016 continue to provide for a guiding star for our city officials, serving for a reminder for Mayor Brain and his six council counterparts that when it comes to funding of community groups in Prince Rupert, the Library remains at least one civic option where more is clearly the better choice.

Mayor Lee Brain posted some welcome news for Library users on his social media platform of Facebook on Thursday, posting a photo of another of the city's popular novelty size cheques, this one printed out to reflect some 625,000 dollars in grant funding for 2017 for the Prince Rupert Library.

With Councillors Mirau, Randhawa and Cunningham along for the presentation, as well as members of the Library staff and Library Board on hand to receive it, the Mayor shared the good news for library users as the community heads into the Seafest weekend. 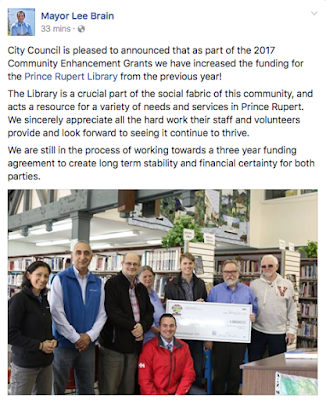 It all makes for quite the turn around of financial fortunes and affection for the vital institution in the community, which not too long ago made an impassioned plea for support and proper funding.

In late 2014, the then newly installed City Council began to tinker with the past process of distributing the grants, exploring a number of options to change the nature of how the city delivers funding to the applicant groups.

Last year, some of their concepts faced the wrath of the community, particularly when it was announced in early January that funding for the Library was going to be reduced.

That  was a  suggestion which quickly was pushed back by a strong and vocal group of local residents and may have taken Council aback a bit by its quick mobilization and tone of commentary.

The outcry from that proposal found the city deflating some of their trial balloons, with Council returning the Library to full funding by March.

From those early days and now through two subsequent budget cycles now, the Library has found a steady increase in funding for their requirements and a renewed appreciation for its services from the residents of the city.

With the most recent financial notes related to Community Grant funding of the 2016 Statement of Financial Information now released by the city, the pace of those incremental gains for the library through the financial grants looks as follows:

As part of yesterday's announcement Mayor Brain made note of the importance of the facility to the city's social fabric and offered up the update that work continues to try and reach an agreement with the Library to secure a three year funding agreement to provide for long term stability and certainty for both the Library and the City.

The Mayor's notes from yesterdays mark the second significant funding announcement released through the social media platform this year.

In February the Mayor made use of his Facebook page to release details of a three year funding agreement that had been reached between the City and the Lester Centre, providing for $125,000 in funding, per year over the course of the three year term.

The ongoing city announcement process marks a bit of a shift in how this Council handles the way that they are approaching the distribution of funding, in previous years council members would hold discussions on the grant process as part of the public city council sessions.

That is something that has not been quite as prominent as in the past, with much of the discussion related to Community grants seemingly shifting to outside of the public council gatherings scheduled for twice a month.

As for the remaining grant applicants for 2017, City Council has yet to publish the list of how much funding they will receive as part of this years Budget calculations.

More items related to City Council discussions can be examined from our Council archive.
Posted by . at 12:30 PM

Email ThisBlogThis!Share to TwitterShare to FacebookShare to Pinterest
Labels: Library to gain additional funds for 2017 grants from City