The digital bytes had barely been transmitted through their twitter stream before reaction came from across British Columbia to the news that BC NDP Leader John Horgan, had been invited to form a government by British Columbia's Lieutenant Governor Judith Guichon.

And while the Lieutenant Governor herself has so far not issued any formal notification of her request of the NDP leader, the Premier designate and his party were quick to spread the word Thursday night.

Mr. Horgan himself broke the news through the social media news delivery platform, with a short tweet that sets the NDP course ahead towards the government side of the Legislature. 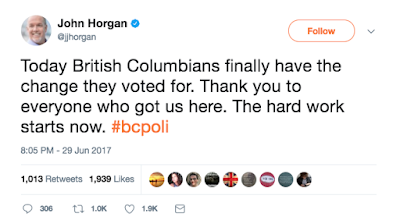 North Coast NDP MLA Jennifer Rice, also wasted no time to take to her Facebook page, ready to share her enthusiasm for the events of the day in Victoria, with two notes for her followers to review in the hours following Mr. Horgan's chat with the Lieutenant-Governor. 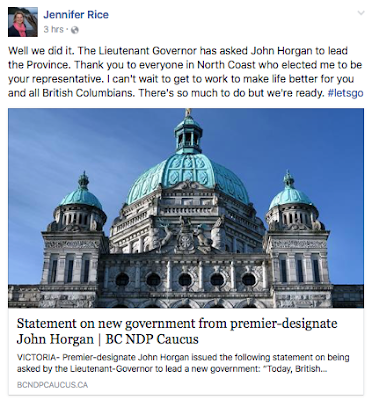 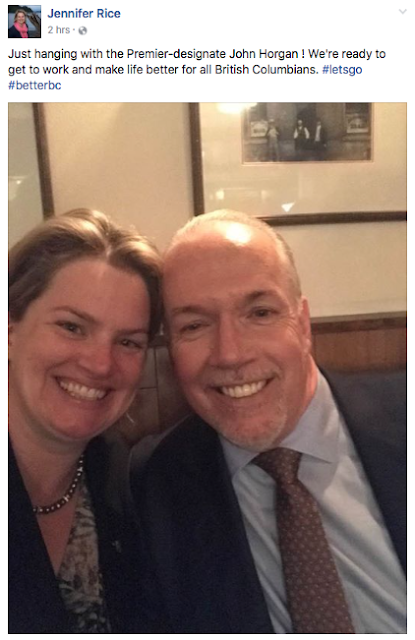 Voters from the North Coast Riding will be watching over the next few days to see if Ms. Rice's workload ahead will increase through a cabinet position, or if she'll be tasked with other duties as a member of the Government back bench.

For the immediate focus, the BC NDP issued a statement on Thursday night, that was one part Political Update and one part campaign style slogan making, as Mr. Horgan noted that there was a lot of work ahead for he and his now government side of the Legislature. 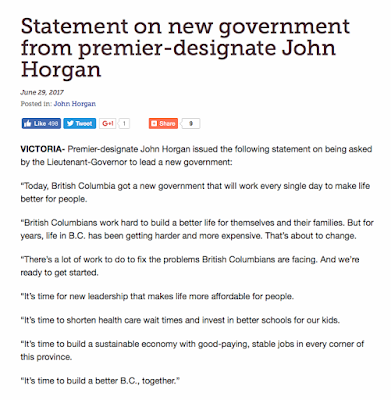 One interesting note from the first statement from the Premier-designate, was the lack of any mention of the Green party members who have made the NDP rise to power possible through the arrangement reached between Mr. Horgan and Mr. Weaver in the weeks just passed.

That oversight, intentional or not, may give some of those pundits who suggest that the NDP/Green arrangement may not last very long, cause to say don't go away, the Victoria drama-a-rama may not be over just yet.

And just in case the summer romance for the NDP and Greens goes all wrong, Elections BC is reportedly already on the job to be prepared, just in case the first NDP government in 16 years is not a long lasting fixture on B.C.'s political scene.

For now however, Mr. Horgan has claimed the title, and he now sets to work to build a cabinet. A task that will no doubt see him reward the MLA's that defeated the Liberal Cabinet power players in the Lower Mainland and elsewhere, as well as to check off the boxes on the NDP cabinet making template.

Some of the longer serving NDP MLA's may find that some disappointment comes their way in the days to come as Mr. Horgan looks to strike the right balance for his shot at governance.

When it is all over and the new ministers have been sworn in and the Lieutenant Governor returns to the Legislature for an encore Throne Speech, some areas of the province may wonder if having a Government back bench MLA is any more of a reward, than the days of having one from the opposition.

In politics, careers ebb and flow as the situation dictates, the next few weeks will chart the political course for many in the NDP, where the North Coast may find itself will make for an interesting aside to the ongoing political theatre to come through the summer.

While we all wait to see what the next twist in British Columbia's political scene has to show us, here's an opportunity to meet your new Premier, courtesy of the BC NDP profile page.

A review of one of the most fascinating days from the Legislature in a long, long time can be found through our Political portal D'Arcy McGee, where we tracked the flow of events from the non-confidence vote of the afternoon to the call to the Premier designate to come on over to see the Lieutenant Governor.

You can review the events of a very busy political day here.

To keep up with notes from the North Coast MLA's work in Victoria see our Legislature Archive here.