There aren't many changes to view when it comes to the City of Prince Rupert compensation packages for elected officials for the last year, with the remuneration and expenses for the Mayor and Council coming in at just over the $175,000 mark as of the final day of December.

Mayor Lee Brain continues to lead the salary listings for elected officials, his remuneration and taxable benefits for civic duties listed at $61,318 a combination of the approved Mayor's salary, as well as an additional amount that was topped up by Council in 2015 through the Planning for Major Projects budget, a pay bump which made use of the Prince Rupert Legacy Fund.

The history of that pay raise goes back to May of that year, at that time Council decided that the Mayor's position required a full time salary, adding on to the base Mayoralty salary of the time of $40,762 dollars, and making use of funds through the major projects budget, it is those twin funding sources that bring this year's compensation to the $61,318 mark.

The city's reporting process comes by way of a lump sum notation on expenses in the SOFI listings, with no further breakdown provided when it comes to where that spending by civic officials took place.

From the combination of Remuneration, Taxable Benefits and Expenses, the Mayors totals for 2016 are listed at $78,592.

The Mayor will also be adding to his year pay package through compensation to be delivered through his work with Regional District, that SOFI declaration will be released through those agencies later this month.

At the May 23rd Committee of the Whole portion of the Council session, Mayor Brain noted that his regional District compensation was expected to be around the $12,000 mark.

As for the remainder of the Council collective, for 2016, City Councillors collected remuneration and taxable benefits of $13,775  each, with varying levels of expenses claimed through to the end of 2016.

For the second year in a row, Councillor Niesh submitted the largest of the expense claims on the year at $4,425, while Councillor Kinney held his expense requirements to the 625 dollar point through last year.

A commitment to municipal service does offer up some benefits for elected officials at tax time in April as well. The Canada Revenue Agency guidelines note that one third of an elected officials salary is deemed as tax free. 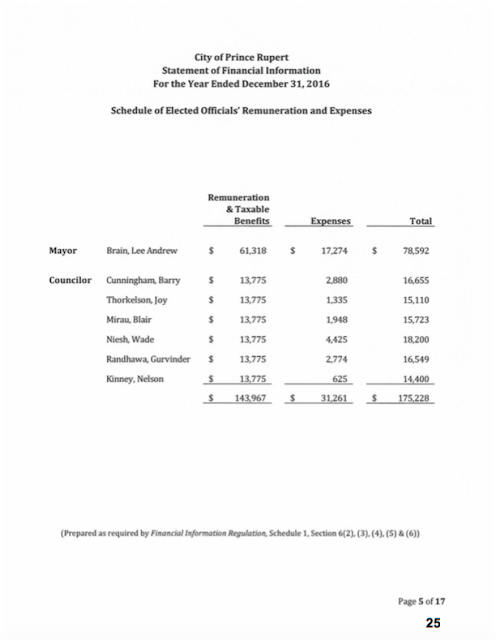 The SOFI documentation for 2016 can be reviewed from the Agenda listings for the June 12th Regular Council session, those files are part of the package available on the city's website.

Once the report is received by Council, the financial reviews can be found on the City Hall archive page here,  allowing for a year to year comparison.

More items of note on the City's budget process can be reviewed here, while our archive of articles on City Council Discussions can be found here.

Update: Mid Afternoon Friday Mayor Brain provided a breakdown of his travel destinations of the last year, as well as the purpose of those trips, posting the information to his Facebook page. 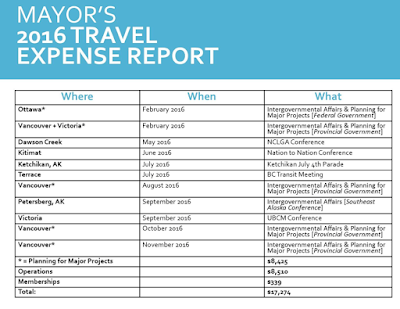