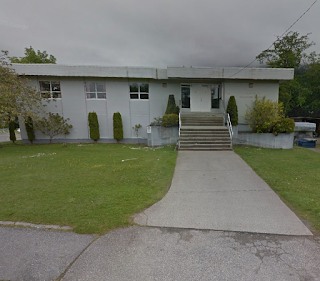 The June 13th School Board meeting found SD52 Board members reviewing a pair of correspondences from the Prince Rupert District Teachers' Union, with President Raegan Sawka raising two areas of concern that the union members had from the School District's April Budget presentation.

The first letter, addressed to Board Chair Tina Last and dated May 1st, highlights the Teachers' union position on areas of staffing levels, particularly those areas that are directly linked to student success and would provide for the best possible environments for all learners.

Among the areas of note and what the Teachers' union is hoping to achieve through their efforts included:

Consultations on new positions such as a behavioural interventionist

The full background compiled by the PRTDTU related to each of those concerns can be reviewed from the letter below  (Click to expand), which is taken from the Agenda of the June 13th Board meeting. 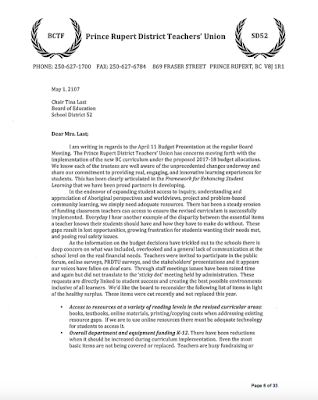 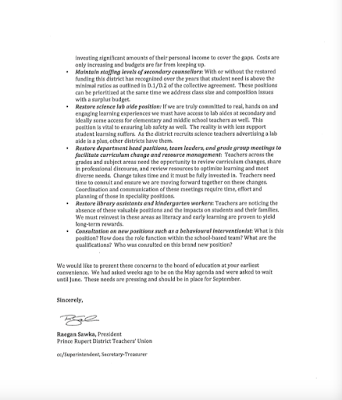 The second correspondence to the School Board Chair, from May 11th, addresses the Teachers' union concern related to what is described as the appalling wait lists for access to level C psycho-educational assessments in School District 52.

Ms. Sawka outlines some of her history in the School District and how the process of assessment has changed since 2001, and while acknowledging the challenges that are in place in finding qualified personnel for positions of assessment, the union expressed its shock and dismay at how the Board has addressed the issue in recent years.

The complete letter of concern can be reviewed below: 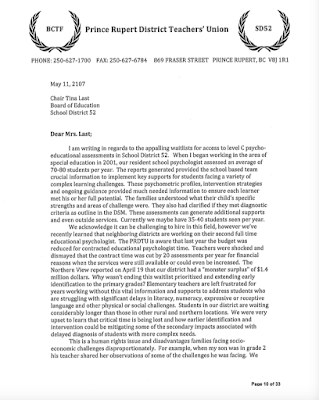 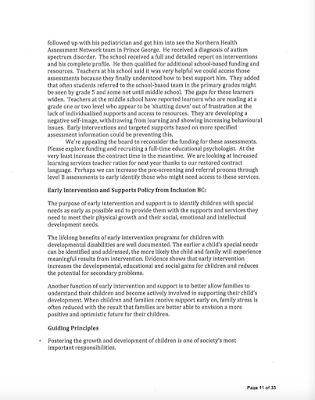 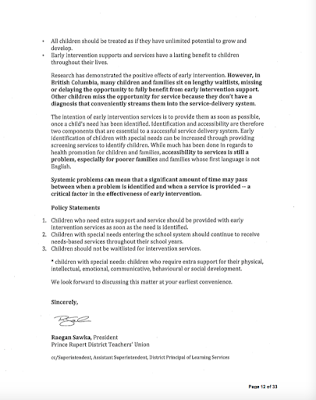 As part of their review of some of the key elements from the June 13th Board meeting, the School District noted that Superintendent Sandra Jones had responded to those concerns at the meeting, however, no detailed review of what those comments or how the issues were addressed have been posted to the SD52 website to this point.

As well, the School District stated that Board Chair Tina Last will be writing to the union to thank them for their letters of concern and to advise that the Superintendent will be following up on those issues.

You can review our notes on the June 13th Board meeting here, while further background on education in the Northwest can be found here.

Email ThisBlogThis!Share to TwitterShare to FacebookShare to Pinterest
Labels: PRDTU letters of concern to SD52