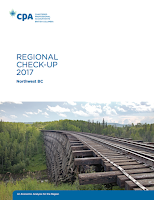 A review of some of the economic trends of 2016 and a forecast for what is left of 2017 was the focus of a new report released by the Chartered Professional Accountants of British Columbia this week, with the organization releasing their Regional Check-Up for Northern British Columbia.

Their findings for the North Coast and Nechako regions of the Northwest make for a mixed bag of observations, with 2016 described as a "rough year" following the strong economic growth of 2015.

The road ahead for the remainder of 2017 would appear to be unsettled owing to a number outside factors.

Jeanne MacNeil, a CPA, CA partner with Edmison Mehr in Smithers offered up some of the recurring items that they came across in their study.

"Construction activity in our region declined, as major project development slowed. The economic momentum from proposed LNG projects also came to a standstill due to market uncertainty and declining fuel prices. Furthermore, low prices for some of our metals led to the shutting down of several mining operations in the region, as well as reduced mine development and mineral exploration activity."


An infographic presentation that is included in the report charts a number of key elements for the region, including continued declines in population, job losses, investment and education achievement through the Northwest. 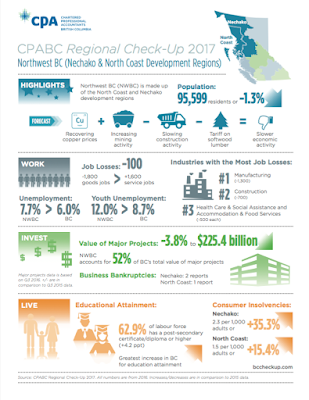 The report includes an overall review of a range of themes on the Northwest economy, with an expanded look at Work indicators, Job Creation, unemployment rates, Investment indicators, Bankruptcy and Education achievements to name a few.

The findings from the report note that as a result of reduced economic activity, the number of jobs in Northwest B.C. declined by 0.2 per cent to 42,100 in 2016. The region's unemployment rate was listed at 7.7 per cent, above the provincial average of 6.0 per cent.

There was also an overall decline in full-time jobs, which meant more individuals struggled to make ends meet. This was evidenced by an increase in reported consumer insolvencies and business bankruptcies.

The organization also made note of some bright spots in the regional economy, highlighting the newly modernized Kitimat aluminum smelter also ramped up to full production, which coincided with a recovery in aluminum prices.

As well, the forestry sector saw some promise in 2026, making for a solid contributor to the economy as lumber production increased and shipments of wood pellets and logs through the Port of Prince Rupert grew.

However, there are some dark clouds on the horizon when it comes to the forest sector with the introduction of new U.S. tariff on Canadian softwood lumber exporters considered likely to impact the forestry sector and affect exports through the Port.

On the theme of some of the high profile industrial projects proposed for the Northwest, the CPABC notes that with major resource projects stalled, construction activity will likely slowdown in the region.

Adding that the region's labour market has already lost another 1,400 jobs over the first quarter of 2017. Those job losses and any that may come from any potential slowdown in the Northwest could see this region jump to the top of the list once again when it comes to unemployment in the province. 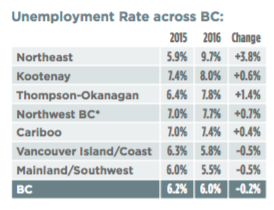 The Chartered Accountants report observes that with the continued uncertainty over commodity prices and trade negotiations, it is likely that Northwest B.C. may be in for a period of slower economic growth in the near-term.

Email ThisBlogThis!Share to TwitterShare to FacebookShare to Pinterest
Labels: Chartered Accountants report on NW BC