By putting off the much needed delivery of a new RCMP detachment for Prince Rupert, the current Prince Rupert Council is learning as we've noted in the past, that kicking a can down the road comes with a cost.

In this case the need for an additional 100,000 dollars for a study, that would examine the cost of just bringing the current jail cells up to current standards, prior to developing any plans for the construction of a new detachment.

The theme of the city's ongoing approach to the now long overdue requirement of a new facility came into public view once again on Monday, as council reviewed their options when it comes to the detachment jail cells concerns.

A discussion that was required with the RCMP in effect serving notice on the City that the current cells are no longer considered to meet national standards, leaving Council to consider a number of different scenarios for a short term fix.

As the City's Chief Financial Officer Corinne Bomben outlined the city's options, don't really offer up much in the way of any financial relief, should they not move to renovate the current facility to address the immediate request:

The first is to do nothing, in which case the RCMP would condemn the structure and then require the transport of prisoners to other communities at City expense and with a loss of Prince Rupert detachment personnel to be available for local duties.

Construct a temporary facility away from the current detachment location.

Hire more guards for the current location, with other noted modifications to the infrastructure as required.

After analyzing all the options, Staff has offered guidance to Council to proceed with further evaluations of upgrades to the existing cell block, the first phase of which will require a study from a consultant to determine the construction cost for any renovations.

For the most part Ms. Bomben stayed the course with her published report for Council that was available for review prior to the Monday Council session, (see our Preview item from Monday for the full document)

The CFO  did deliver some news related to the city's ongoing relationship with the RCMP, noting that since the City put aside any plans for a new detachment, the City was now in receipt of two more letters from the national police service advising as to the insufficient nature of the local detachment and the need for replacement, with the RCMP now in the position of being able to build one on their own and send the city the bill if they so desire.

That proved to be an underlying theme for Council members who reviewed the request for a study into the jail cell situation, as Council members weighed the option of spending 100,000 dollars on a study for a building that may not be in service much longer, compared to the cost of doing nothing and having to house prisoners in other communities with Prince Rupert paying the bill to a tune that could be over 1 million dollars annually, until the local detachment issues were addressed.

At the end of the near twenty minute discussion, Council voted to seek out the consultants report at the $100,000 cost, though not without some concerns raised by Councillor Thorkelson regarding past studies related to the development of a new detachment, past efforts that now it would seem are destined to gather dust somewhere.

The purpose of Ms. Bomben's report to Council was to seek guidance from Council as to what direction they wished staff to proceed, with staff proposing funding the entire project through short term financing of a loan, which would require an increase of one per cent to the civic mill rate on taxation for the life of the proposed short term loan, though it was noted that would not take place this year.

Ms. Bomben also observed there are no grant opportunities available related to renovation for jail cell infrastructure, as well she noted that staff was advising that making use of Prince Rupert Legacy Corporation funds for the project was not a wise allocation for those resources.

Likewise, she outlined that using accumulated surplus for such a short term requirement, was not a wise course of action to follow.

Once the $100,000 study on the cell block renovation plan is complete, staff will return to Council with a larger overview of the cost for those renovations and to seek further direction on their intentions moving forward.

The full overview of the jail cell concerns can be reviewed from our City Council Timeline feature.

The renovation of the  jail cells however, will only be a short term measure to address but one small element of the much larger issue, which remains the need for movement by Council on the replacement detachment issue.

"After touring the building, and seeing what the problems are, the building definitely needs to be replaced. Unfortunately, we're in the position of not being able to afford to do any of this. But, if we don't do something, at least a short term fix, we're going to end up putting ourselves in a position where eventually they can just build an RCMP station and send us the bill"  -- Councillor Wade Niesh

"I know that we're in kind of a financial state, but, I agree with Councillor Niesh here and sooner or later we're going to need to bite the bullet and build a new station, and how much time is this (study/uprgade) going to buy us. In every year that we wait to build a new station, the construction costs are getting higher and higher, and it's something that I think we have to take a serious look at. If we keep putting band aids on it, pretty soon the band aids come off too ... I really think that we should concentrate on a new police station as soon as possible and any other frills we've got, cut them and get this done. Because whether we go to a referendum or not, it doesn't mattter, they're just going to build it and here's the bill, it's just that simple" -- Councillor Barry Cunningham

"I was on that tour too, I agree with both Councillors Cunningham and Niesh, this facility needs some improvements urgently, my only concern is if we can save some money on the consultation that would be nice, other than that we need to upgrade that facility" -- Councillor Gurvinder Randhawa

"Well, I think this is a prime example of  something that we're all familiar with, of the can being kicked a little too far down the road, which we've experienced before"-- Councillor Blair Mirau

"I'm concerned that we're spending 100,000 dollars and what I would suggest is that we say to a maximum of 100,000 dollars. It just seems to me that it's a lot of money to spend  and come out of it with nothing but another study. I was on the council in 2011, where we studied it and came up with nothing but an expensive study, that's all we did, and to do that again, just seems to me to be a waste of taxpayers money  -- Councillor Joy Thorkelson


As Council members observed, the time apparently has come to get the issue resolved and there may even be activity happening in the background towards that day when the local officers have a new place to hang their hats and lock up their prisoners.

Last October, we took note of a notice to the public printed in the weekly newspaper that had identified a parcel of land behind the Lester Centre, more or less, across from the foot of 11th Avenue East as the subject land that could be put to use for a new detachment for the RCMP.

The public notice of last October noted that the proposed road closure in the area surrounding the Lester Centre, would created a lot approximately 2.6 hectares to facilitate the construction of an RCMP facility in the City of Prince Rupert, something that suggests that the some form of planning is in motion for the construction of a new home for the city's police force. 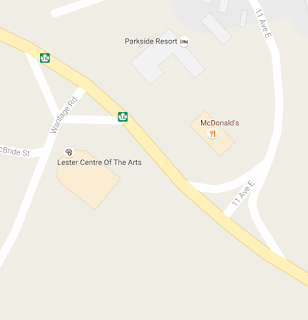 How long the wait may be and whether the City of Prince Rupert will be a design participant, or reduced to the status of just paying the construction bills, is something that will be determined by the actions ahead by the current City Council members.

Hopefully, Mayor Brain and the Council six prove to be a little better at keeping the city's residents informed on how the issue is evolving this time around, than has been the practice since the current group took office in 2014.

A journey back into the time machine traces some of the key moments in the city's detachment procrastination process can be reviewed below:

The full discussion from Monday's Council session is available from the City's Video archive, it starts at the 34 minute mark.

More notes related to Monday's City Council session can be found here, While a larger overview o City council discussions can be found on our Council Discussion archive page.

Case files from emergency responders across the Northwest can be found here.
Posted by . at 10:01 AM