After more than a month away from the Council chambers, Prince Rupert's seven elected council members will make their return to work on Monday evening.

And as they do, they head into this 2018 election year with plans to dedicate a little less time towards attendance at public council sessions for the year ahead.

As the end of 2017 arrived, the City of Prince Rupert had slipped the notice of their new schedule plans for 2018 into the back page of the city's newspaper during the extra busy holiday season.

It made for a rather limited flow of information which we took note of back in mid-December when we first outlined the somewhat unusual decision, one which saw Prince Rupert council decide to reduce their time in public council session for this year.

Following our review of the city's rather light schedule plans and the nature of the delivery of that information for 2018, the city also posted a copy of the new Council calendar to the city's website. 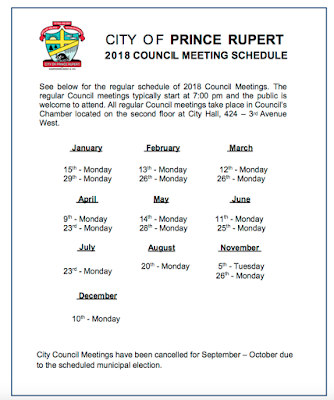 The  schedule for 2018 includes a decision to eliminate all sessions in September and October  and as is noted in the city's advisory, the move to stay off the public record for those two months was apparently made owing to the the arrival of the two month period that will lead up to the November election.

It makes for an unusual viewpoint towards municipal governance, and one that doesn't seem to be held by other regional elected officials and in the case of Prince Rupert, has been made without any public explanation as to why they believe that is a required course of action.

As we noted in our December article, not only do the City Council's of Terrace, Kitimat and Smithers intend to hold to their public sessions during the months of September and October, they also seem to have a more expansive and regular schedule of work planned for the year ahead compared to their counterparts here on the North Coast.

In addition to the various regional councils to the east, Prince Rupert's neighbours in Port Edward will see their council members spend more time in public session for the year ahead, with Port Edward members set for a 20 date calendar of public availability, including three council sessions in September and October, prior to the November municipal election.

The move to reduce the public sessions in Prince Rupert, will also reduce the public contribution options that are normally provided through the Committee of the Whole process, making for two more lost opportunities for the city's residents to speak on the record in September and October.

The decision to reduce the public Council sessions also appears to have been made outside of the public Council process, with no discussion held on the theme in the final months of November or December, the only indication of the Council decision coming from that one notice in the weekly paper and the City's schedule advisory on their website.

Making a change as startling as to eliminate eleven weeks of public discussion at City Hall (Council members have no public sessions scheduled from August 21st to November  5th) is surely something that deserved a bit of discussion in the public forum, if for no other reason that to allow the council members to share their thoughts on the theme of how they plan to approach the council process for this year.

Perhaps Monday's first public session of the year will offer up an opportunity for the Six members of Council and Prince Rupert Mayor Lee Brain to provide a few more details as to how they came to make their decision.

As well. Monday could provide the city's residents with a roll call of sorts, to let us know if the move to eliminate the public Council sessions for the fall is a unanimous decision from this current collection of council members.

As we get closer to the Fall election campaign, voters will no doubt be hearing a lot about the always popular themes at election time of the need for accountability and transparency as guiding principles for our local politicians when it comes to how they conduct the city's business from City Hall.

However, that theme might be off to a bit of a rough start, considering as to how the city's elected officials have gone about their plans to reduce the most basic concept of municipal governance; that being the amount of time that they plan to dedicate their time towards public sessions and the opportunity those sessions provide for council members to be on the public record for 2018.

You can review the work of Prince Rupert Council from 2017 from our archive listings of both their public and Closed sessions.

Monday's council session starts at 7 PM, it streams live over CityWest Channel's 10 and in HD on Channel 310 (and their website)

Council sessions are also streamed live  through the City's website.

For more items of note related to Prince Rupert City Council see our Discussion archive page here.
Posted by . at 9:17 AM

Email ThisBlogThis!Share to TwitterShare to FacebookShare to Pinterest
Labels: Council members return to work Monday with a reduced schedule of Public sessions for the year