The start to 2018 got off to a disturbing beginning for many in the community, as a brazen and senseless incident of vandalism was delivered to the city's showcase park space in the heart of the city at the mid week period of the new year.

The incident, which took place in the late evening or early morning hours of the Tuesday/Wednesday period, saw a range of graffiti spray painted to the new playground apparatus, as well as other damage inflicted on the rubber matting and other features of the site.

The members of the RCMP were quick to make arrests, six in total, as last Wednesday had moved forward, with the local detachment outlining how the nature of their investigation into another vandalism call in the downtown area had subsequently led to the arrests in regard to the Mariner's case file. 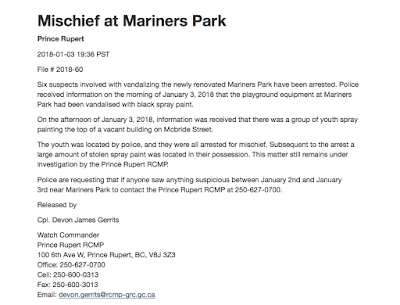 The Mariner's Park vandals, clearly touched a nerve in the community with their destructive path of late Tuesday, or early Wednesday morning and by first light of the day, the incident had become a social media frenzy, so much to the point that the City's Mayor felt the need to address the issue through his civic Facebook page.

In his comments for the public, the Mayor counselled patience to the community and seemed to indicate that his preference as to how to handle any punishment was to weigh understanding to the cause for the vandalism, with a need to hold those responsible for their actions, though he did not outline what solutions he might have related to that aspect of punishment for the incidents. 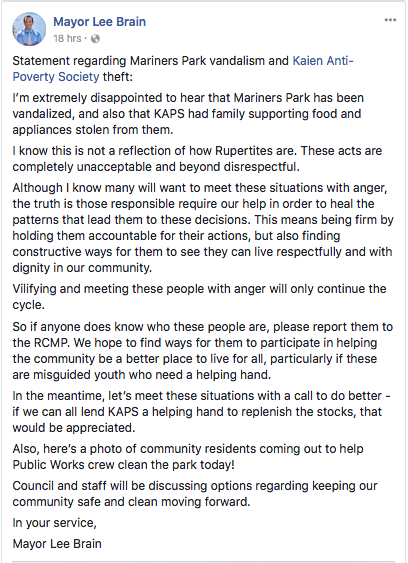 The Mariner's Park incident was not the first time that the highly visible and popular downtown play area had been targeted by vandals, with a number of incidents taking place through the fall as the new playground was being constructed.

In a way, the general sense of outrage related to the destructive attitude towards the park, seems to have provided for a tipping point of sorts for community anger on the theme, an indication to which can be found through some of the comments portion to the mayor's Social media post.

The ongoing issue of Vandalism is not restricted to that one park area in the downtown core, and for a while now, the issue of destructive behaviour has become a common theme on social media.

One only has to follow the trail of spray paint from building to building in the downtown area and beyond, to get an understanding as to how long standing the concerns are when it comes to both the condition of the downtown and issues of general safety in that area of the city.

In his Facebook post, the Mayor notes that the City council and its staff members will be discussing a number of options when it comes to keeping the community safe and clean, a topic that will most likely find some resonance with the local population it would seem.

The Mariner's Park vandalism clearly dominated the news cycle for the week just passed, a sample of some of the coverage can be found below:

A wider overview of Prince Rupert City Council issues can be examined on our archive page.
Posted by . at 9:38 AM